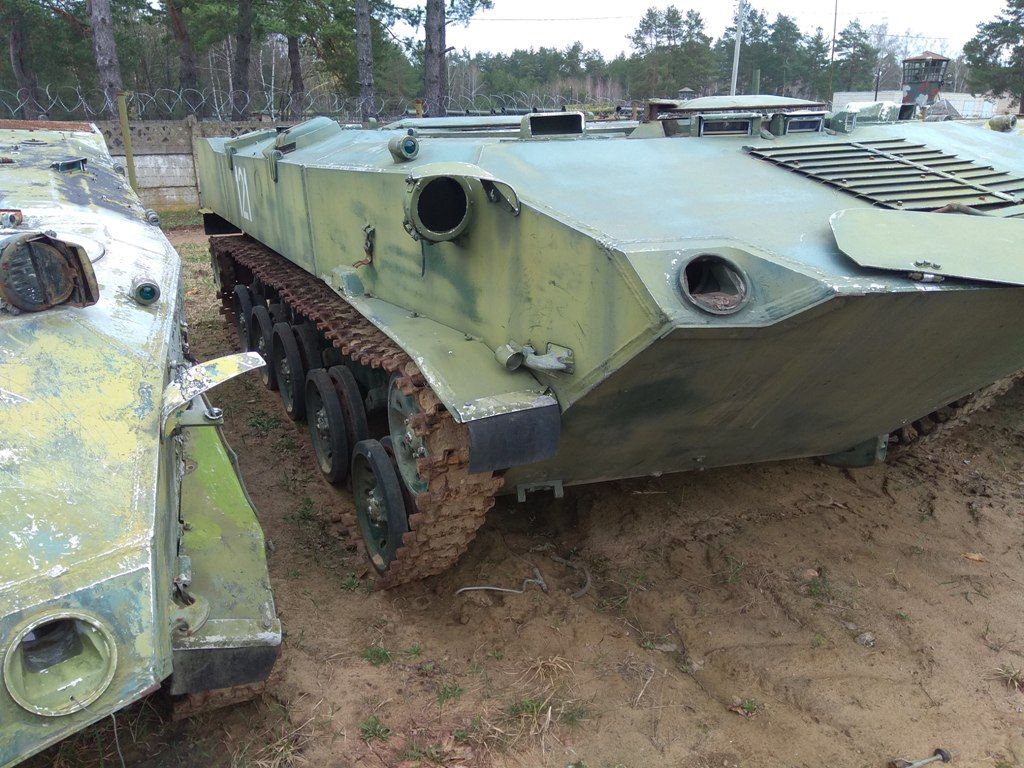 Work on the creation of an infantry fighting vehicle for arming the USSR Airborne Troops was initiated by the commander of the Airborne Forces V.F. Margelov. By the 1960s, the problem of the lack of heavy weapons that could land with paratroopers was still not overcome in the USSR; during the 1950s, paratroopers were mainly armed with small arms and grenade launchers. By the beginning of the 1960s, the tasks of anti-tank defence and direct support of the airborne troops were provided to one degree or another with self-propelled anti-tank systems based on the BRDM and BRDM-2, anti-tank self-propelled guns ASU-57 and ASU-85 and towed or self-propelled artillery. At the same time, GAZ-67, GAZ-69, UAZ-469 and GAZ-66 off-road vehicles remained the only means of transporting airborne personnel. The need to create an armoured transport and combat vehicle was reinforced by changes in military doctrine, especially the widespread use of tactical nuclear weapons. To ensure the actions of the paratroopers, a machine was needed that was similar in concept to the BMP-1 developed for the Ground Forces and that provided both transportation of paratroopers and the conduct of combat from under the armour of the machine on radioactively contaminated terrain, as well as the fight against enemy armoured vehicles and their tank dangerous means. BMP-1 itself, although it was airborne, did not satisfy the airborne forces due to the fact that the main Soviet military transport aircraft of the An-12 period could carry only one 13-ton BMP, to which in addition there were no parachute landing systems.

The BMD-1 is equipped with a V-shaped 6-cylinder four-stroke diesel engine of liquid cooling model 5D20-240. The engine has a displacement of 15,900 cm³ and develops a maximum power of 240 litres. with. (176 kW) at 2400 rpm. The engine is launched on the BMD-1 of early releases using the main electric starter or a backup air intake system; with the introduction in 1973 of a compressor driven by an engine, the air intake system became the main one. To facilitate starting at low temperatures, the engine is equipped with an electric nozzle heater included in the cooling system.

The engine runs on diesel fuel brands DL, DZ and DA, the fuel system includes three tanks with a total capacity of 280 litres, located in the engine-transmission compartment. The air purification system is two-stage, with a cyclone block in the first stage, filter cartridges in the second and automatic ejection dust removal. To increase the safety of movement afloat, two connected valves are included in the engine air intake system, providing air intake afloat through the middle compartment. The engine has an ejector-type cooling system, which also provides ventilation for the engine compartment and dust extraction from the air cleaning system.

The BMD-1 transmission was not changed during serial production, with the exception of replacing the single-disc main clutch with a double-disc clutch since 1970. All transmission control drives are mechanical. The main clutch, gearbox and swing mechanism are combined with the engine in one power unit.

The main armament of the BMD-1 is a 73mm smooth-bore semi-automatic gun 2A28 “Thunder”. 2A28 has a monoblock barrel, a vertical wedge gate with a semi-automatic copy type and a hydraulic concentric recoil. 2A28 uses unitary shots with active rockets (grenades), the gun’s ammunition consists of 40 shots, placed in a mechanized warhead. Shots are located around the perimeter of the tower in the mechanized laying conveyor, which ensures that the shot is brought to the loading point, after which the gunner-operator manually loads the guns. The combat rate of fire of the gun is 6-7 rounds per minute. The ammunition of the guns initially included only PG-15V rounds with cumulative grenades having 300 mm normal armour penetration, later modernized grenades with armour penetration increased to 400 mm were introduced into it, as well as fragmentation grenades. The maximum range of the cumulative grenade is 1300 m, and the maximum range of fragmentation, formally, 4400 m, but in practice the effective range does not exceed, respectively, 800 and 600 m.

The gun is placed in a twin-mounted machine-gun mount on the pins in the frontal part of the turret; the maximum pointing angles of the mount in the vertical plane are from −5 to + 30 °. Guidance of the installation is carried out by the 1ETs10M Kristall electromechanical drive, providing the installation guidance speed from 0.1 to 20 ° per second in the horizontal and from 0.07 to 6 ° in the vertical plane, or by a duplicate manual drive. Guidance on the target is carried out using the combined periscope sight 1PN22M1 "Shield". The day branch of the sight has a magnification of 6 × and a field of view of 15 °, while the night branch is a passive type night vision device with a magnification of 6.7 × and a field of view of 6 °  and working by enhancing the natural night illumination, providing a range of vision about 400 m. BMD-1 does not have a range finder, but the sight is equipped with a scale for determining the distance to the target of known height - 2.7 m (“tank”). With the introduction of shots with fragmentation grenades on BMD-1, the 1PN22M2 sight began to be installed, which differs only in the presence of an aiming net for firing fragmentation grenades having a different ballistics. On machines with old sights, fragmentation grenades were to be fired using the amendment table attached to the sight body.