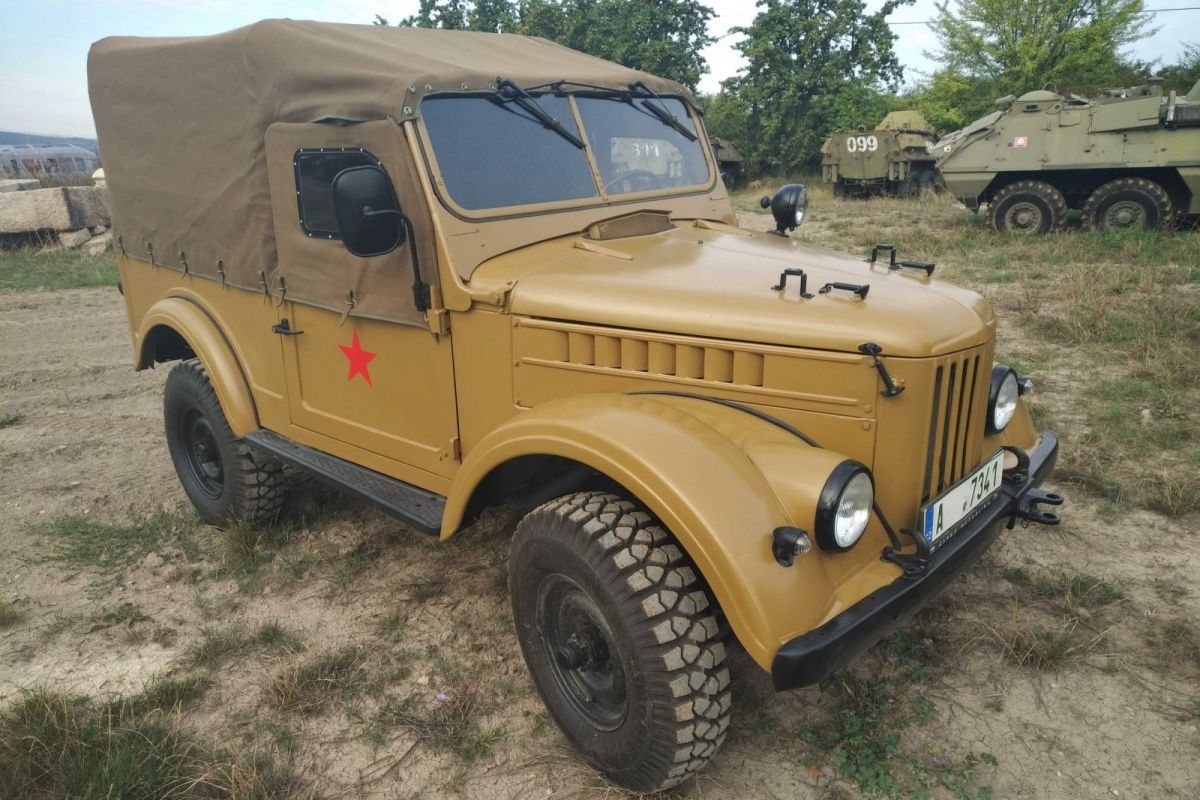 The gazik is to the USSR what Willis Jeep was to the US (- except that in the former Soviet Union a GAZ-69 will still be used as a means of transport). It is also heavily indebted to the Jeep concept. Its canvas top makes it greatly balanced and hugely enhances its pass-through capacities. We supply vehicles both with original GAZ-20 engine (with a pedal starter) and a 3-gear transmission and with UAZ ZMZ engine, which has more power, is more reliable and, most of all, is a way cheaper to repair. Both four-door and two-door version are available. Canvases always have to be hand-made, or else they'll not fit well (each vehicle is an original).

GAZ-69 (Russian ГАЗ-69) is an all-wheel-drive vehicle that was first produced in series by the Soviet Gorkowski Awtomobilny Sawod (GAZ) from 1953. It is the successor to the GAZ-67B from 1944 and was replaced by the UAZ-469 at the beginning of the 1970s. Identical vehicles were given the designation UAZ-69 as part of a change of manufacturer. The Romanian vehicle manufacturer ARO produced the vehicle in various versions from 1957 on under license. Its chassis is identical to UAZ-452.

The first prototypes of the vehicle were made in October 1947. The shape of the body differed from the later production vehicle. A second and third series of prototypes were built in February 1948, all variants were extensively tested for 12,500 kilometres. Factory tests were completed in summer 1948 and the vehicle was recommended for production.

In May 1951, the GAZ plant built a prototype of a four-door version that was later to be produced as the GAZ-69A. This vehicle was also subjected to tests that were completed by September 1951. Serial production was still not approved, instead the production of the predecessor GAZ-67 continued.

Serial production of the vehicle began on August 25, 1953. The delays were also due to the fact that the production was classified as militarily relevant and that extensive safety precautions were taken. The assembly took place in a separate production complex, which could only be entered by selected people. The vehicle was presented at a parade on November 7, 1953, in Moscow. By the end of the year, a total of 1302 pieces had left the factory premises.

A year later, in 1954, Gorki's production was moved to the Uljanowski Awtomobilny Sawod. The Gorki plant had chronic difficulties because too many models were produced at once. By relinquishing the production of the GAZ-69, capacities for the truck production became free. There were no technical changes, only the lettering on the bonnet changed from GAZ to UAZ. In 1957, the Romanian manufacturer ARO started license production. Initially, the vehicles were built under the name IMS 57, from 1959 under changing names.

The GAZ-69 was exported to a total of 56 countries. From 1961, the GDR imported around 2500 copies and an additional almost 5000 from Romanian production.

The data apply to the basic model GAZ-69, whereby the specifications of the other models differ only slightly.