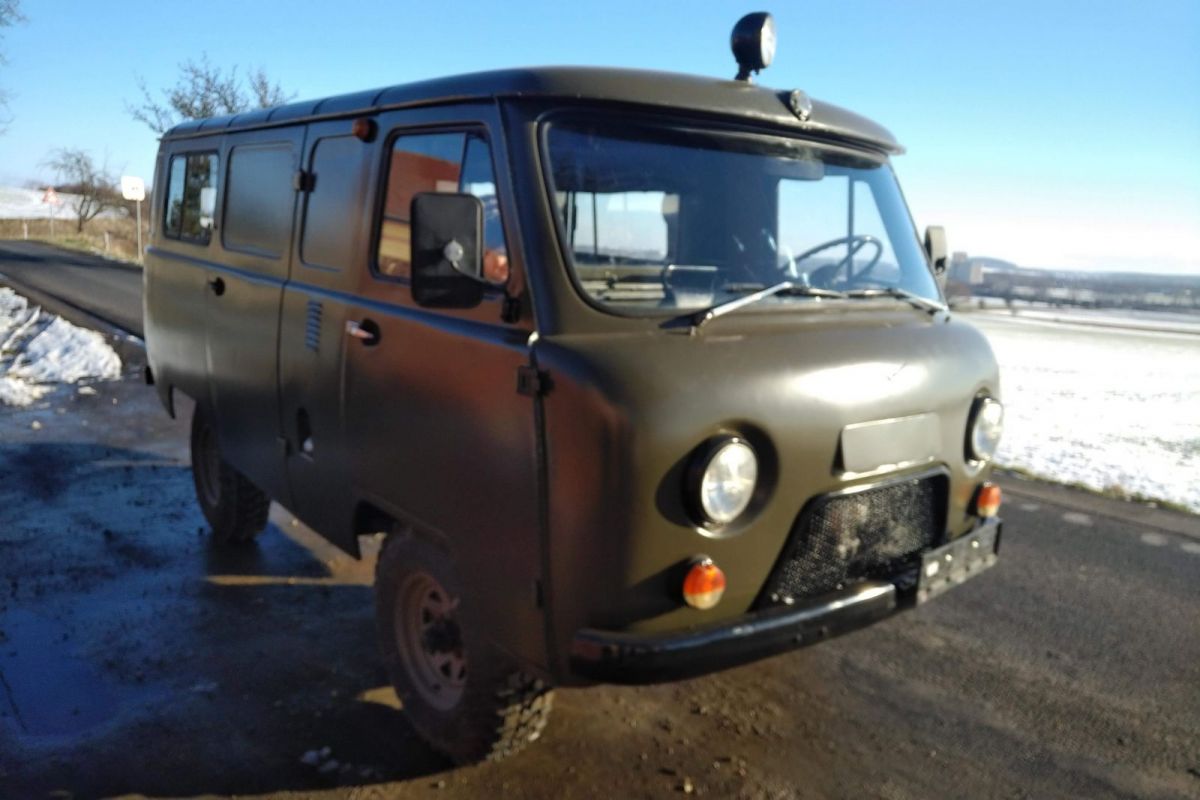 You'll hardly find a vehicle that resembles a VW T-1, has great 4x4 capacities and a feel of an eastern step. The easiest camper, a hunter's friend and a surfer's friend. The rear compartment is well isolated and heated. For larger projects, we offer an optional latest, more powerful yet still carburettor UAZ engine. We also usually equip these vans with unused surplus engines. Many have undertaken long voyages with Bukhankas by Mortar Investments.

A client travelling with a UAZ 452 through the Balkans. His blog is here.

UAZ-452 cars, produced between 1965 and 1979, were distinguished by the presence of old-style lighting equipment (colourless turn signals, round taillights), stamping of the last side false window coming back to the rear doors, more rounded by the rear corners of the body, a special niche for a license plate on the left back door. The car is produced both in the body (wagon) and onboard versions (“tadpole”). The car body can be equipped with side single-leaf doors and a double-leaf door at the rear (the door configuration depends on the specific modification). The engine is a variant of the GAZ-21 engine. Wheel formula 4 × 4.

The UAZ-452 is a small van with two axles and switchable all-wheel drive, which is built in different versions. The first version, released in 1965, is 4363 mm long, 1940 mm wide and 2064 mm high. The maximum load is 800 kg, the maximum trailer load is 850 kg. This basic structure with a closed cabin and four doors (driver, front passenger, second row on the right, double-leaf tailgate) has been largely retained. Vehicle variants with platform or box bodies and configurations with seats for up to ten seats are now also available. A four-cylinder gasoline engine drives the vehicle via a manual transmission.

The first vehicles came on the market in 1965 as the successor to the UAZ-450 under the name UAZ-452, equipped with the 52 kW, 2.4 l in-line four-cylinder gasoline engine ZMZ-451, which can be operated with 76-octane gasoline. The four-speed gearbox is shifted by hand. A facelift followed in 1979, in which the white turn signals were replaced by yellow ones and the round taillights by square ones. From 1985, the UAZ-452 was equipped with a 73 kW motor and split into five different sub-models that are still offered today. In addition, special vehicles are also in the program for authorities.

In 2018 the appearance and production of an anniversary version for the sixtieth birthday of the vehicle called "loaf of bread" (Russian "Buchanka") was announced; the innovations included a two-tone paint job, a single key and renewed sliding windows. A heated driver's seat is also available as an option. Furthermore, the anniversary model has an electrically operated differential lock on the rear axle, which is why another axle type is used.