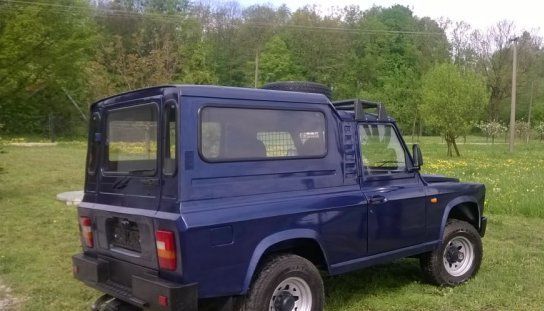 HISTORY OF THE ARO BRAND.

ARO is the oldest car manufacturer and so far (2014) the only off-road car manufacturer in Romania.Industrial activity began in 1885 with the founding of Letea papírny near Campulung Muscel in Romania.In the years 1943-1944, aircraft propellers and photographic equipment for the Brasov Aircraft Company began to be manufactured here - the company was called U.M.M. (Musina Mechanical Machine) In the years 1954-1957, the factory produced components for the automotive industry, for Tudor Vladimirescu (light trucks), vans and minibuses manufactured at the Autobuzul factory in Bucharest.In 1957, the first Romanian car, the IMS-57 type, was produced here (since 1957, the production of mechanics for the Autobuzul factory in Bucharest has been running in the factory together with the production of off-road vehicles). In 1959, a modernized model, type M-59, was produced here.In 1964, production of the M461 began here. In 1970, the brand was changed to ARO (Automobil ROmanesc) In 1972, the production of ARO 240 and 241 cars began hereIn 1975, the production of M461 cars was terminated.

Testing of the M461 prototype began in the winter of 1961 and took place exclusively at night, earning it the nickname "plimbaretul nocturn" (night pilgrim). At the same time, 4x4 models from well-known manufacturers were studied and tested, and special attention was paid to Land Rover cars. Excellent test results led to the second prototype in 1964, when serial production also began. Compared to the predecessor of the M-59, the new model had a completely redesigned platform.
Model name M461 means:

The key to success was the new M-207 engine with 70k output and significantly lower consumption, so it was a decisive factor in the start of exports (in 1965). During the first two years of production, all 81 design differences from the predecessor of the M-59 were deployed, and an increasing number of M461 cars began to exceed 100,000 km without the need for overhaul.

Over 2,000 pieces were imported to Columbia. In Cairo, about 2,000 pieces were assembled from parts sent from Romania, these cars were then used by the Egyptian army under the name Ramses (many of them are still actively used and their reliability is something like a local legend).

One of the best customers was the Romanian Ministry of Defense. Romanian military models had specific equipment depending on the area of ​​use (communications, chemical defense, command vehicles). The cars were khaki in color with tricolor on the doors, camouflaged lights (front and rear), curtains behind the front seats and on the rear side windows of the sail.

For other markets, the factory preferred to import turn signals from Trabant cars (older models with a chrome frame, newer versions with a plastic frame). Other imported parts solved reliability problems, in particular wipers and wiper motors from East Germany, ignition from Poland and on-board instruments from France.

For tax reasons, many cars were exported with an L-25 2495ccm 80k / 4200ot engine with an 8: 1 compression ratio. A reduced stroke volume (from 2512ccm) was achieved by reducing the stroke by 0.6mm. The old M207 engine type was modernized in 1973 and the M20 type was created - the main changes are in lubrication (the oil pump was modified and moved more centrally, the oil filter was moved from the left side of the engine to the right). The carburetor remains the same - W 207/42 DSR-1 (manufactured by Brasov under license from Weber). The BAR 1 induction coil has been replaced by the UEPS 3130.

The warranty of the vehicles was 6 months or 10,000 km, the interesting thing is that the car could be ordered with a package of spare parts directly from the factory.

Compared to the previous model, there were changes: three central openings in the radiator grille, one-piece windshield, battery and tank were moved to the right, starting on the key (instead of the button), pocket in the driver's door was vinyl (instead of cloth), doors with frames and sliding glass (opening mechanism from Dacia 1100), glass in the tarpaulin was abolished (for export, on the contrary, there was a version with four windows in the tarpaulin), rear window significantly enlarged, wiper blades on the bottom of the window frame, steering is under the axle ; in addition, the engine, transmission, chassis, steering and suspension have been completely redesigned.

In March 1968, the car began to be imported to the Czechoslovak Republic. These were practically the only cars with 4x4 drive that could be purchased new and which were intended for the civilian sector. They served in a number of socialist organizations, such as forests, cooperatives, energy, firefighters and mountain huts.

In the Czechoslovak Republic, it was possible to buy the car exclusively from the national company Mototechna, with an open two-door body (2 + 6 seats) with the possibility of stretching the canvas roof, or as a hard-top (production in Jablonec nad Nisou) in two versions.

ARO 24 has been a range of off-road vehicles manufactured since 1972 by the ARO Automobile Company. The first model, officially called ARO 240, went into production after a period of 6 years of design. The first appearance of the new model took place at EREN 1969 (Exhibition of National Economic Achievements), in Bucharest. The production of this series of off-road vehicles was stopped in 2006.

Aro series 24 officially appeared in 1972, the Romanian engineers being inspired by FIAT Campanola,  which in turn was inspired by Jeep Wilys. There is evidence that this model has appeared since 1969, probably those being test models.

The first model of the series was 240, a convertible model with 2 doors, tarpaulin, independent suspension, front, 4-speed gearbox, transfer case, all-wheel drive, new engine, 2500 cc, 75 hp, although the first models had engines from the IMS 461. The independent suspension was a novelty on off-road vehicles at the time. Exports began after 1973, but export models had other engines to meet pollution standards. In 1975 the model 241 was launched, a convertible model this time with 4 doors, the model 243 was launched, a model with a fully closed rear body, similar to 240. This model had optional windows, and had a total of 8 seats or partition wall and cargo space. In 1976-1977, the 244 models with 5 doors and the 320 model were launched, which is in fact a van based on an elongated chassis of the 24th era. These models were manufactured by Rocar. In 1975, the 242 model was launched, a van derived from the 240/243 models. In 1984, a new plastic mask was adopted, which had either 2 round headlights (models 243 in particular), 4 round headlights (especially on 244), and 2 rectangular headlights type dacia 1300 (241,242 but also 243,244). The 320 series had the same restyling. The first aro series 24 had rectangular headlights type dacia 1300 and stop lamps type Bucegi truck, but in 1976, headlights from the Bucegi truck and a new model of stop lamps were adopted. In 1984 a new dashboard was introduced, as well as new dashboards, for example the dashboard from.dacia 1310. In 1978 the first diesel engines Brasov D127 were introduced, capacity 3100 cc and 68 hp, with a speed maximum of 110 km / h. In 1985, the 5-speed gearbox was introduced, as well as the optional disc brake on the front wheels. This study has been carried out since 1978. In 1985, the Câmpulung D27 Diesel engine was launched, with a capacity of 2.6 l, 69 hp, indirect injection and could reach a speed of 115 km / h, but this engine did not it was very popular because it had problems starting in the winter.

In 1990, studies were made to introduce new engines. It was restyled in 1994, with a slightly elongated mask, oltcit taillights, and in addition to Romanian engines are introduced new engines from famous manufacturers such as Perkins, Cossworth Ford, VM Motors, Renault, Peugeot-Indenor, Toyota, Andoria. Aro 24 was well received for export in both socialist and capitalist countries. He also participated in the Paris Dakar Rallies, and was exported to Africa, India, the USA and South America. It was made in Spain, Portugal under the name Hisparo and Portaro respectively. In Germany it was probably successful because the competing model Mercedes G Klasse had a prohibitive price and was not available to private individuals in the first phase. There are rumors that the Mercedes-Benz G Klasse was copied from the Aro, given that the Mercedes-Benz G Klasse appeared in 1979, 7 years later. 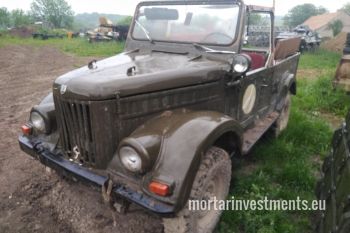