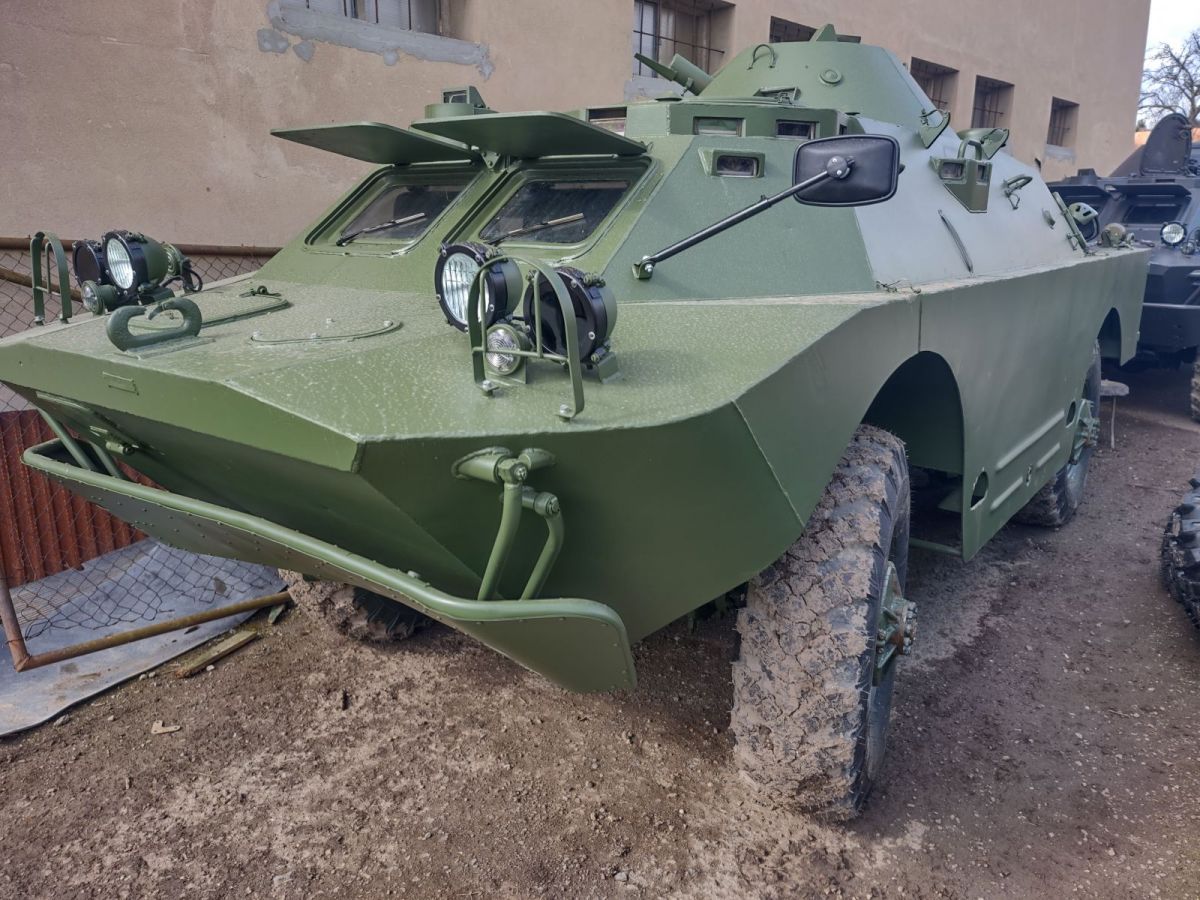 Among all historical APCs one can buy, the BRDM-2 is the easiest to drive Compared to both OT-64 SKOT and BTR-60). There is, generally speaking, no difference to a truck. It is also by far the best swimmer, as its hull is in one piece - just like a boat. It is a very nice car. Storable in a garage, with little air system and a trivial construction it demands little from its owner. Its engine is based on that of a GAZ-66, and so are other systems, such as brakes. Auxiliary MIG-21 wheels are of little use but give the vehicle a particular feel. BRDM-2 SKOT uses 13.00 R18 tyre size. Its airborne follower is a BMD-1.

The BRDM-2 armoured hull in terms of security corresponds to the 1st NATO class - in the side projection and the 2nd NATO class in the frontal (with the exception of the turret) - that is, it provides protection against ordinary (without a heat-strengthened core) bullets of both automatic and rifle cartridges when firing at the side, point-blank, fragments of 155/152 mm shells from a distance of 100 meters. And from rifle bullets (including with a heat-strengthened core) when shooting point-blank - when hit in the frontal projection. However, rifle calibre bullets made from tungsten-based alloys pierce the frontal projection of the BRDM-2.

With cartridges of 12.7 mm heavy machine guns with an armour-piercing bullet with a hard-alloy core, as well as with cartridges of 14.5x114, the armour of the BRDM-2 makes its way from a distance of up to 1200-1500 meters.

The armament of the BRDM-2 is the coaxial installation of a 14.5 mm KPVT machine gun and 7.62 mm PKT. The installation is placed on the pins in the frontal part of the turret, its guidance in the vertical plane, within −5 ... + 30 °, is carried out manually using a screw mechanism, horizontal aiming is carried out by rotating the turret. The aiming of machine guns at the target is carried out with the help of a periscope telescopic sight PP-61 or PP-61AM, having a magnification of 2.6 × with a field of view of 23 ° and providing fire from KPVT at a distance of up to 2000 meters and from PKT - up to 1500 meters. KPVT is designed to combat lightly armoured and unarmoured enemy equipment and has an ammunition load of 500 rounds in 10 tapes equipped with B-32 armour-piercing incendiary bullets and BZT tracer armour-piercing incendiary, with a tungsten carbide core, BS-41 bullets and BST tracer, and also incendiary RF. The Kalashnikov machine gun is designed to destroy enemy manpower and fire weapons and has an ammunition load of 2000 rounds in 8 tapes.

The strength characteristics of the armoured hull allow installing modules with guns up to 23 mm in calibre instead of a turret with a 14.5 mm KPVT machine gun.

As a reconnaissance vehicle, the BRDM-2 has a developed range of surveillance tools. The machine commander has a binocular periscopic tank panorama TPKU-2B, providing a 5 × magnification with a field of view of 7.5 °, which made it possible to observe at a distance of up to 3,000 meters, and giving a circular view. At night, the TKN-1C monocular night-vision device was installed at TPKU-2B, having a magnification of 2.75 × and a field of view of 10 ° and providing surveillance at a distance of up to 250-300 meters when illuminated with an OU-3 infrared illuminator In addition to them, the commander has four fixed periscope devices: one TNPO-115 and three TPN-B, providing an overview of the frontal and right side sectors. The driver has six periscope inspection devices: two TNPO-115 and four TPN-B, providing an overview of the frontal and left side sectors. At night, the TNPO-115 central device is replaced by a TVNO-2B binocular fixed night-vision device, which provided surveillance in the 30 ° sector at a distance of 50-60 meters. In non-combat conditions, the commander and driver could observe through inspection hatches in the frontal sheet of the hull. The observer at each of his places had three TPN-B periscope devices, which provided an overview of the corresponding airborne sector. TPN-B and TNPO-115 had a single increase and were distinguished by the presence in the latter of electric heating, which improved visibility through them at low temperatures. The turret shooter, in addition to the sight of the machine-gun mount, which he used as the main means of observation, had a TNPT-1 periscope device installed in the roof of the turret and providing 52 ° observation of the feed sector.

The BRDM-2 is equipped with an eight-cylinder V-shaped four-stroke gas engine GAZ-41, similar to the engines installed on GAZ-13 and GAZ-14 Chaika cars. Engine power is 140 litres. with. The engine uses a combined lubrication system (under pressure and by spraying). The oil pump is a two-section gear type. A jet centrifugal oil filter with a jet drive is also used. The total capacity of the fuel tanks is 280 litres.

The transmission is mechanical. It has 4 forward and one reverse gear. The clutch is single-plate, damper with an outer diameter of the driven disk of 300 mm.

Wheel undercarriage. The camber angle is 0 ° 45 '. Car tires 12.00-18 "with central pressure control are installed, similar to the tires of GAZ-63, GAZ-66 and ZIL-157. Suspension spring with longitudinal semi-elliptic springs. The ends of the springs are mounted in rubber cushions. On each axle, there are two hydraulic shock absorbers of a telescopic type with two-sided action.

To overcome trenches and trenches, two pneumatic wheels from each side were installed on the BRDM-2. The size of the wheels is 700 × 250 mm. Before overcoming obstacles, the wheels are lowered, and after overcoming - they are lifted using four hydraulic lifts with a ball lock. The wheels, as well as the main ones, are leading. They are set in motion thanks to the power take-off via chain transmissions.

The water jet is installed in the rear of the machine. Water is drawn from under the bottom. Propellers are equipped with propellers with a diameter of 500 mm. Traction at 900–1100 rpm of the screw is 700 kg/f. The mover is driven by a special power take-off mounted on the left side of the gearbox. 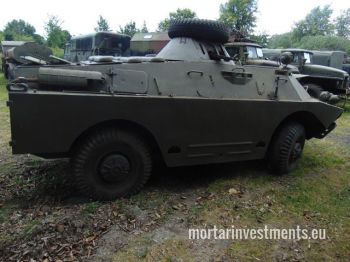 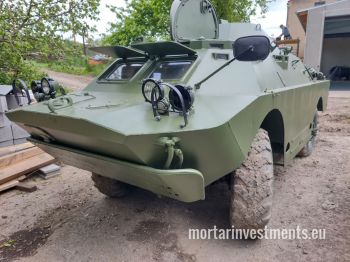