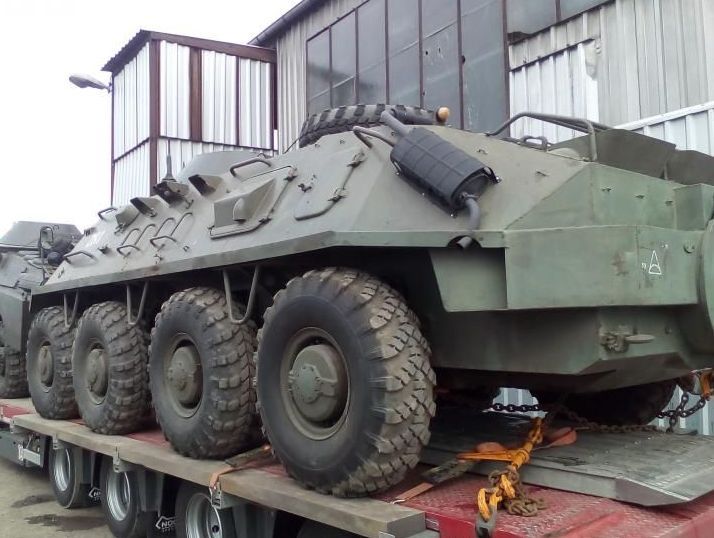 The classic Soviet APC. It will not be missing in any Red Army movie. Elegant, and -for its time- pioneering. Few vehicles in private hands. Having a double, rather underpowered engine, posses some technical challenges. A permit may be required for its over-sized width. The only access to the vehicle lead is through the front hatches. Yet all this cannot counter-balance the feeling of a Soviet occupant repressing a liberation movement in his sphere of influence. Engines are very similar to ZIL-157. Its Central European counter-part is the OT-64.  BTR-60 wears 13.00 R18 tyre size.

The BTR-60 power plant consisted of two paired in-line 6-cylinder carbureted liquid-cooled engines of the GAZ-40P model, which were a forced version of the GAZ-51 truck engine and developed power up to 90 litres. with. each. Both engines were mounted on a common frame in the engine compartment along the axis of the machine and brought two axles each: the right engine - the first and third, left - the second and fourth in front, and the front two axles could be disconnected. Also, both engines jointly powered the jet, while the right one worked to drive the winch. Two fuel tanks were installed in isolated compartments in the engine-transmission compartment.

Each of the engines of the armoured personnel carrier worked on a separate transmission, which included:

The transmission design allows, in the event of a failure or shutdown of one of the engines, to continue the movement of the armoured personnel carrier at a speed of up to 60 km / h on the highway and reduced passability.

The BTR-60 has an 8 × 8 wheel arrangement with four axles equally spaced along the base and driven by two front wheel pairs. The wheels of the armoured personnel carrier are equipped with bulletproof single-pitch tires of size 13.00-18 ″ and have a central air pressure regulation system with two compressors, which allows changing it, including on the go, in the range from 0.5 to 2.5 kg / cm². This can be used both to increase cross-country ability and to continue driving if the tire is not too seriously damaged. The specific pressure on the ground, depending on the pressure in the tires, can vary from 0.96 to 2.16 kg / cm², while the first value is quite comparable with the specific pressure created by the main battle tanks and even less than some modern models. The suspension of all wheels is independent, torsion bar. Each wheel is suspended on two levers located one above the other, pivotally connected to the side of the body. The lower one is suspended on a torsion shaft located longitudinally along the side of the hull, and the upper one has two hydraulic shock absorbers on the first, second and fourth axes. Thanks to the four-axis formula, the BTR-60 can continue moving, completely losing any two wheels.

On the BTR-60P of early releases, the commander and driver in the daytime in non-combat conditions monitored the area through two hatches in the upper frontal sheet of the hull. To monitor the frontal sector in combat conditions, as well as on the sides of the car, we used removable prismatic viewing devices B-1, installed three in the manhole covers, as well as in the upper cheekbones - two in the left and one in the right. On the BTR-60P of later releases, the commander also received a TPKU-2B rotary periscope viewing device, which had a magnification of 5 × with a field of view of 7 ° 30 ′, and for observing the terrain at night, the armoured personnel carrier was equipped with removable passive night vision periscopic devices - TVN- 2 for the driver and TKN-1 for the commander, mounted in the nests above the upper frontal armour plate, as well as the OU-3 infrared spotlight. The same configuration of the viewing devices was preserved on the BTR-60PA and BTR-60PA.

On the BTR-60PB, the commander retained his TPKU-2B viewing device, but the B-1 viewing devices were replaced by the TNP-B periscope viewing devices, which were installed as follows: two on the sides of the commander TPKU-2B, three on the driver’s for review frontal sector, one on the upper cheekbones and one in the front of the upper side armour plates. Night-vision devices were also saved, but the searchlight was replaced with an improved OU-3GA2. The paratroopers got at their disposal periscope observation devices: MK-4N, which was installed in the roof of the hull behind the turret on the left and TNP-B, which was installed in the upper side sheet of the hull opposite it. The shooter in the turret had no means of observing the terrain, in addition to the sight of machine guns, but on the BTR-60PB of later releases, the TNPT-1 periscope observation device began to be installed in the roof of the turret for viewing the rear hemisphere.

On the BTR-60P, all armament consisted of a 7.62 mm SGMB machine gun mounted on one of three brackets on the front of the hull and on the sides. The ammunition of the machine gun was 1250 rounds in 5 tapes. On the BTR-60PA and BTR-60PA1, the SSMB was replaced by a design bureau of the same calibre and with the same ammunition, a similar replacement was subsequently carried out on the already issued BTR-60P. Besides, in the armoured personnel carrier, in addition to landing weapons, there were: a 7.62 mm AK-47 assault rifle with 300 rounds of ammunition in 10 stores, an RPG-7 grenade launcher with 5 rounds of ammunition and 10 F-1 grenades. There are also photographs of the BTR-60P / PA / PA1 with armament consisting of a 12.7-mm DShK machine gun on the front arm and SGBM on the side, but this configuration was not standard and was used only at parades.

On the BTR-60PB, the armament was the coaxial installation of a 14.5 mm KPVT machine gun and 7.62 mm PKT. The installation is placed on the pins in the frontal part of the turret, its guidance in the vertical plane, within −5 ... + 30 °, is carried out manually using a screw mechanism, horizontal aiming is carried out by rotating the turret. The aiming of machine guns at the target was carried out using a periscope telescopic sight PP-61, which had a magnification of 2.6 × with a field of view of 23 ° and which provided fire from the KPVT at a distance of up to 2000 meters and from the PKT - up to 1500 meters. KPVT is designed to combat lightly armoured and unarmoured enemy equipment and has an ammunition load of 500 rounds in 10 tapes equipped with B-32 armour-piercing incendiary bullets or incendiary armour-piercing bullets with a tungsten carbide core and BS bullets. PKT is designed to destroy enemy manpower and fire weapons and has an ammunition load of 2000 rounds in 8 tapes. 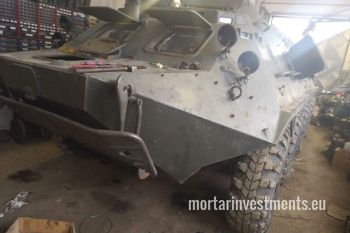 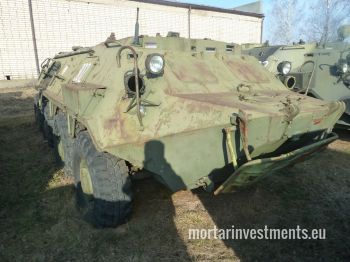 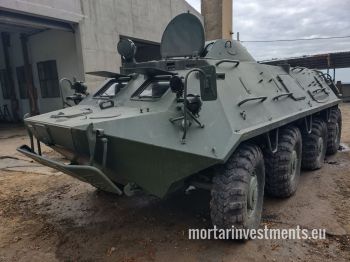