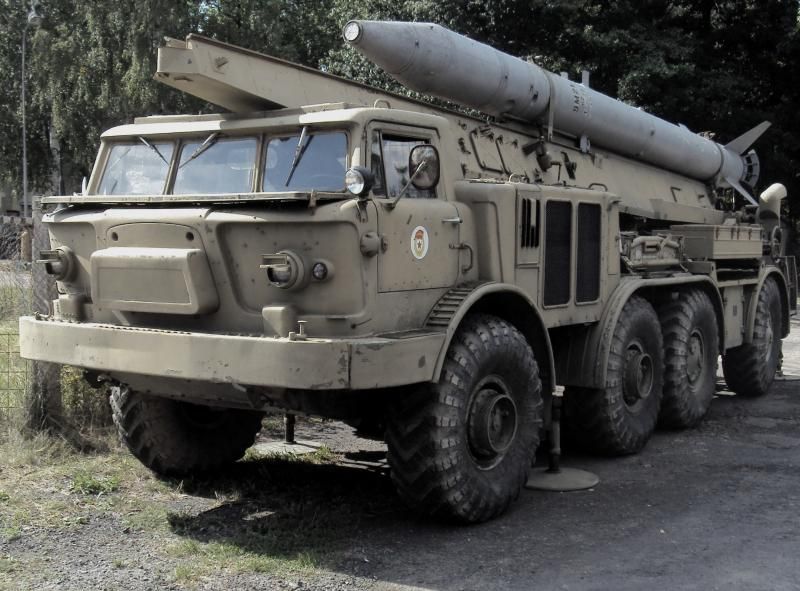 We also sell ZIL-131 and ZIL-157. Alternatively, you may buy a MAZ-537 rocket-launchers and ATS-59G artillery tractors.

In the 1950s, the Soviet army decided to introduce new mobile missile systems into the army. This project required the development of a new mobile rocket launching vehicle that could meet these requirements. The result was the ZIL-135, which became the basis of some Soviet missile systems such as the FROG-7 missile complex or the BM-27 missile launcher system on the ZIL-135LM.

Only the development and manufacture of some prototypes was realized at ZIL. Serial production took place at the subsidiary Brjanski Awtomobilny Sawod, also BAZ, (Russian Брянский автомоби́льный заво́д). It still produces heavy trucks and cranes, as well as military equipment. Production ceased in 1993. In the literature, the vehicle is sometimes referred to as BAZ-135.

Initially, the ZIL-135 was developed as a transport truck for towing the barrel artillery in the Special Design Bureau of the ZIL under the leadership of V. A. Grachev in the early 1960s. It was produced from 1963 to 1995. It was largely exported.

The ZIL-135 (Russian ЗИЛ-135) is a heavy four-axle truck (8 × 8) from the Soviet / Russian vehicle manufacturer Sawod imeni Lichatschowa, which was produced in series from 1966. This truck was used in many countries, not just within the former Eastern Bloc. 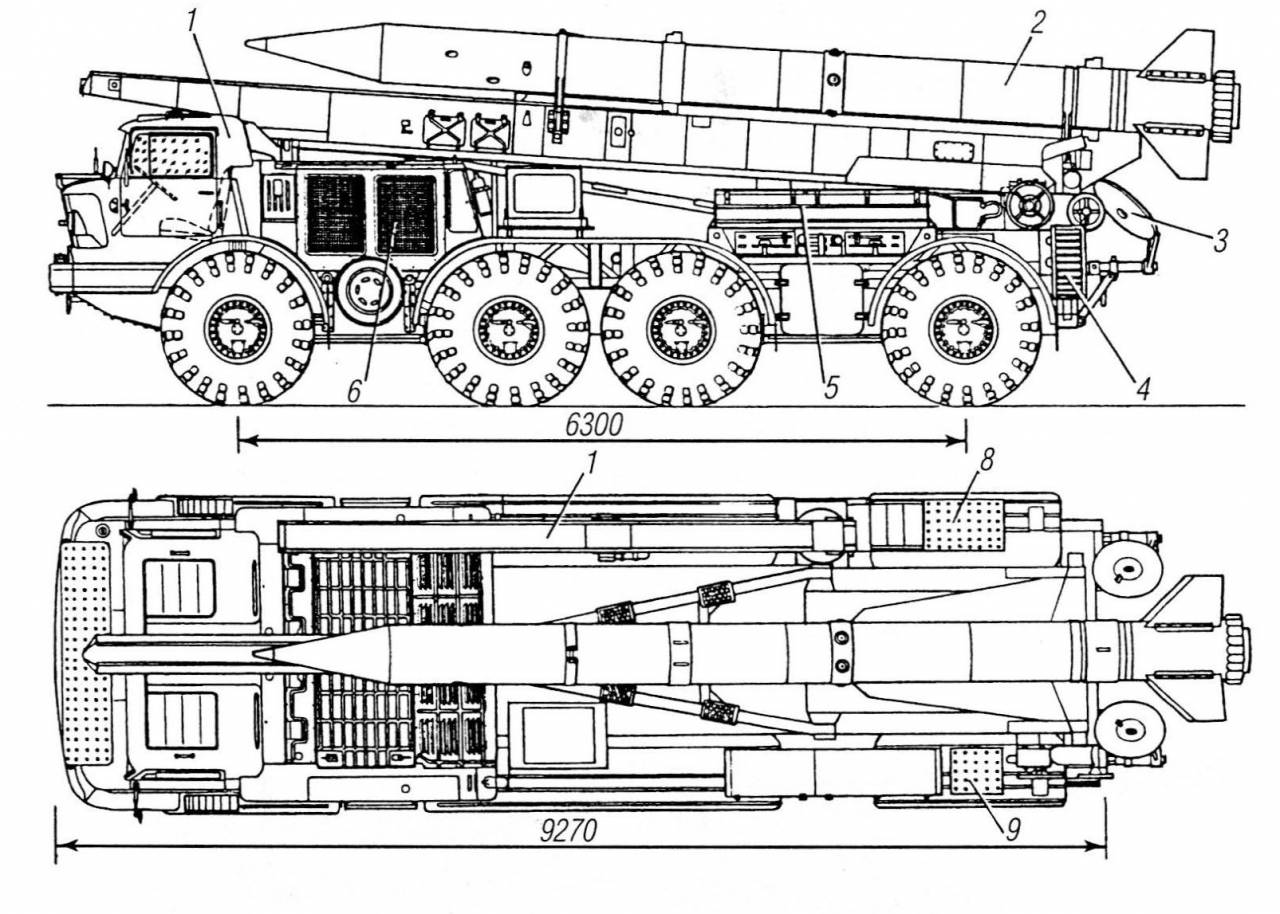 The machine was equipped with two ZIL-123F engines with a capacity of power of 120 hp. each, installed behind the cab (in later models, ZIL-375 engines were used). Each engine rotated the wheels of its side, which provided additional survivability of the machine. Due to the use of low-pressure tires, as well as because of the desire to minimize the weight of the machine, the designers decided to abandon the elastic suspension as such. Subsequently, on models 135L / LM, to eliminate "galloping" (longitudinal swaying), which distinguished previous machines of the 135th family, it was decided to return an independent torsion bar suspension with hydraulic shock absorbers to the wheels of the extreme bridges, while maintaining a rigid attachment to the frame of the two middle bridges.

The wheels of the extreme axles are made controllable. Other parameters, including dimensions, load capacity, suspension design, the ability to swim, wheelbase and so on, varied widely from one model to another.

The cab was made of fibreglass to alleviate the machine and to increase load capacity.

ZIL-135P - floating platform, all-terrain vehicle, amphibious assault transport. The design was developed in 1965 on the basis of ZIL-135. The all-terrain vehicle was widely exploited in the Arctic, Baltic and Barents Seas. Withstands a five-point storm and can storm thin ice. The front and rear axles are swivel, which allows you to make turns on the spot. The machine passed all the tests successfully, but it was not received by the Armed Forces of the USSR and was not mass-produced.

ZIL-135LM - wheeled non-floating all-terrain vehicle. It was produced at the Bryansk Automobile Plant (BAZ). It was hastily developed on the basis of the ZIL-135L model and differed from it by replacing a complex automatic transmission with a mechanical one, from where the letter “M” appeared in the name. The creator of the family of cars, Vitaly Grachev, was categorically against such a decision, calling it a “step back”, but the Bryansk Automobile Plant was not able to produce hydromechanical gearboxes (according to one version, it was a protest after the cancellation of the production of its own development BAZ-930), and the car with The manual transmission went into series, eventually becoming the most massive in the family.

Manual gearboxes significantly worsened many of the characteristics of the machine. The torque converters in the original version of the machine well compensated for the difference in the torque characteristics of the left and right side engines. In the case of a mechanical transmission, this was not possible, and to ensure acceptable driving characteristics, it was necessary to carry out complex adjustments of carburettors and ignition devices for left and right side motors to ensure their synchronous operation, especially in transient conditions. Of great difficulty was the adjustment of two clutches for synchronous operation. In practice, especially during the period of combat work, to achieve all this was extremely difficult. As a result, the power units of most machines worked non-synchronously: the engine of one of the sides was “leading” (developed excess power), and the second was “driven” (developed insufficient power), which led to their premature wear. At the same time, the “driving” engine wore out due to overload, and the “driven”, which essentially slowed down the “driving” one, wore out even faster due to flushing oil from the cylinder walls with unburned gasoline. When starting off, due to the non-synchronous operation of engines and clutches, the car often noticeably turned, which led to a fall while driving along narrow bridges and entering railway platforms.

The disadvantages of a machine with a mechanical transmission were fully manifested during the fighting in Afghanistan. Since at that time it was the only chassis for the Uragan RZSO, attempts were made to improve the performance of already existing cars by installing instead of two gasoline power units a single YaMZ-240, KamAZ-740 or 1D12 diesel engine (with hydromechanical transmission) with Transmission and double-hull differential. However, the differential servicing four bridges at once turned out to be bulky, heavy and unreliable. It became obvious that a machine with such a transmission scheme had outlived its century, and in the future, the Bryansk Automobile Plant already implemented other drive schemes.

The vehicle is powered by two engines that can accelerate up to 65 km / h. One motor each drives the wheels on the right and left side. The vehicle has eight wheels, the front and rear axles being steerable. The maximum range is 400 kilometres. The vehicle had an average consumption of around 100 litres per 100 kilometres.

The ZIL-135 was mainly used militarily as a rocket launch, transport and loading vehicle, for example in connection with the Soviet short-range ballistic surface-to-surface missile FROG or the multiple rocket launcher systems BM-22 and BM-27.

Civilian versions of the ZIL-135 also exist in different versions, for example as a flatbed truck (referred to as ZIL-135 L4), as a crane vehicle or as a transport truck for pipeline pipes.

The individual data partly vary depending on the structures used. 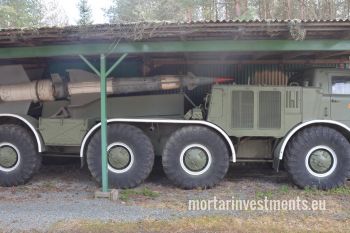