The PTS-2 (Russian ПТС-2, Плавающий транспортёр средний -2 in English: medium-sized floating transporter 2) is a track-driven amphibious landing vehicle from Soviet production. It is the second version of the PTS series, the first variant of which came from the 1960s. Its basis is the ATS-59G.

The development of the PTS-2 as the successor to the PTS was carried out by the Luhansk locomotive factory in 1973 and introduced in the mid-1970s. The main designers were S.P. Filonow and V.P. Koldow. The aim of this further development was to use the increased payload to transport military trucks, medium-calibre artillery and soldiers across water surfaces. The PTS-2 was exported to various member states of the Warsaw Pact and Middle Eastern countries and is still in use today. The minor successor PTS-3 was developed in the 1980s, but was only produced in small numbers. In 2009, the Russian Ministry of Defense decided to replace the PTS-2 with the fundamentally modernized successor, the PTS-4.

The chassis of the PTS-2 is based on the T-64 chassis, but has an additional roller on each side. The engine consists of a water-cooled twelve-cylinder V-engine of the type V-46-5, which was also used in other Soviet vehicles. The drive unit has a displacement of 38.88 litres and generates 710 hp (522 kW). The cab, which is heated in winter, is lightly armoured (protection against 7.62 mm projectiles) and, unlike the PTS-M, has a door to the loading area. As armament, some PTS-2 have a 7.62 mm PKB machine gun. To protect the crew, the tracked vehicle has an ABC protection and ventilation system, which is intended to ensure endurance in areas contaminated with ABC ordnance. At the rear, below the rear ramp of the vehicle, two propellers with rudders are installed, which accelerate the vehicle in the water to a maximum of 11.7 km / h when it is fully loaded. The PTS-2 is the first vehicle in the PTS range to the sea. For this purpose, a bilge system consisting of two pumps with a high delivery rate, an extended exhaust system and a gyrocompass were installed. In addition, there is a support plate at the rear of the vehicle, which can be lowered hydraulically and has a stabilizing effect during loading and unloading and should optimize the swimming properties in the water. The PTS-2 is buoyant without preparation, only the baffle on the bow has to be folded down to cross a water hazard.

The flat loading area without lanes is approximately 23.6 m² (8.23 m by 2.87 m) compared to 20.5 m² (7.9 m by 2.6 m) with the PTS-M. The PTS-2 can transport up to 75 people or a vehicle of the size of a military truck (e.g. Ural-4320). The maximum load capacity in water and on land is 12 tons, resulting in a maximum total mass of 36 Metric tons. Loading and unloading is carried out using a lowerable rear ramp that can be moved with a hand crank. The vehicle has a winch for loading support. In addition, the floating single-axle trailer PKP was developed, which was pulled by the PTS-2. When crossing water surfaces, however, the combination of PTS-2 with PKP did not work.

Technical data of the PKP trailer 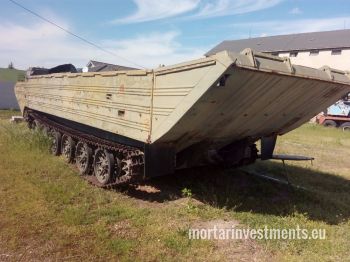 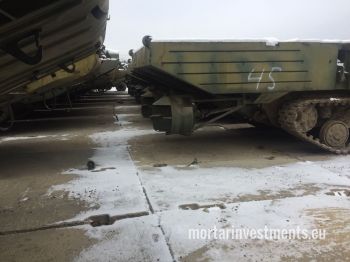