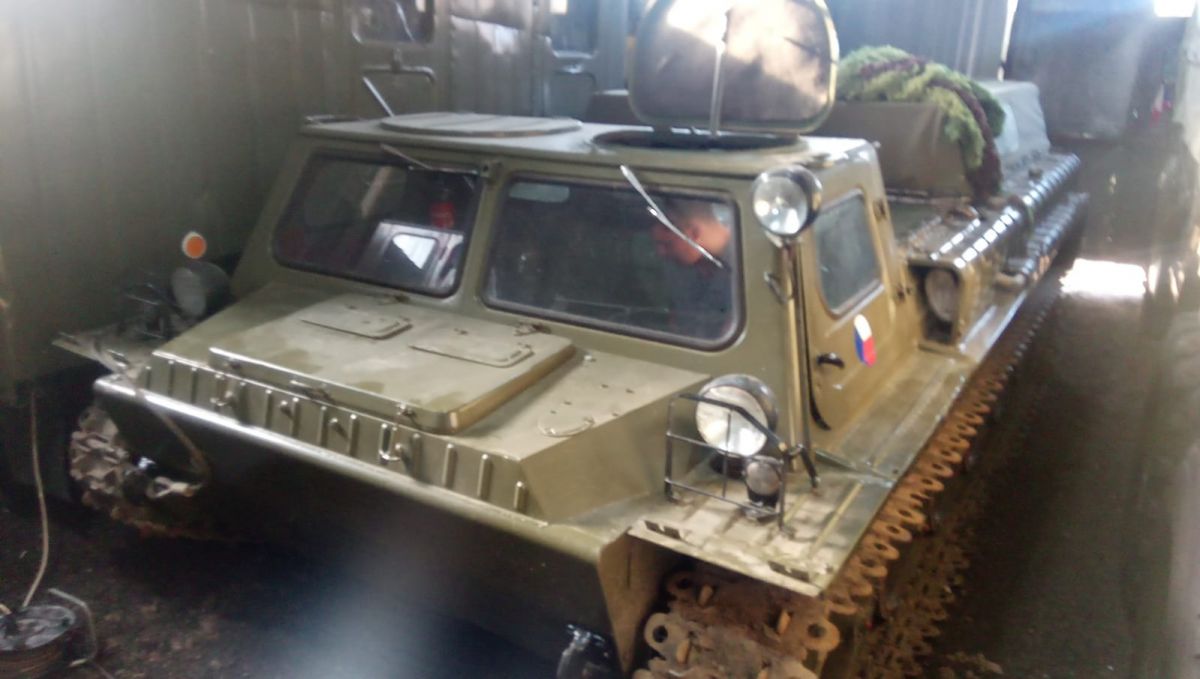 It was produced from 1968 to 1985 at the Zavolzhsky crawler tractor plant (ZZGT). The basis for the creation of the GT-SM was the tracked conveyor GT-S (GAZ-47).

GT-SM conveyor is a floating snow and swamp tracked vehicle with a carrying capacity of 1 ton which is intended for transporting personnel, various cargoes, towing trailers (of up to 2000 kg), evacuating the wounded and for other needs of troops in the northern regions of the country. The conveyor can be operated on all types of roads and off-road terrain with the ability to overcome water barriers. The conveyor is designed for operation and garageless storage at temperatures from +40 to −50 ° C.

The machine has been widely used and is used in areas of the Far North.

All further modifications of the GAZ-71 basis increased the reliability and autonomy of the machine, but at the same time its weight increased to 5.3 tons and the specific ground pressure increased from 0.17 to 0.21.

Payload 1250 kg. All torsion bars are “thick” (on the GAZ-71 - only in the front and rear pipes). Double windshields. The fuel tanks were increased from 75 to 93 litres, the brake belts in the final drive were replaced by more wear-resistant ones.

External differences from the GAZ-71: bevelled casings of 93-litre tanks, side door glass on bolted frames, GP cover on internal locks, sprocket crowns - 13-tooth, with bolts, and not with rivets.

All these cars have a gearbox (together with a transfer case) from a GAZ-66 car.

Since the speed of the D-247 diesel is less than the gasoline ZMZ-66, the gear ratios in the final drive and the transfer case of the gearbox were changed on diesel engines to achieve the same maximum speed. The sprocket became with 13 teeth instead of 12, the crowns are more powerful, bolted, not riveted, the sprocket itself on the side shaft is mounted not with a nut, but with three bolts through a powerful washer.

GAZ-34039 - the currently manufactured ATV with a D-245 diesel engine with turbocharging, as on the ZIL-5301 "Bull-calf". Power increased. 5-speed gearbox and a new main gear in a block with a transfer case. Instead of the right front tank, an autonomous body heater is installed. Clutch and gearbox from the GAZ-33104 Valdai. The visual difference from GAZ-34037 is that the “fungus” of the air intake is moved to the left side.

GT-MU - lightly armoured tracked airborne armoured personnel carrier for the army of minimum dimensions. Very manoeuvrable machine with a rigid, tenacious body, but a large wear of the tracks due to weight. The armour is about 6 mm thick upwards from the tank covers, the side behind the track is 4 mm, (the bottom is not armoured - like on an ordinary all-terrain vehicle), filter-ventilation installation, loopholes, triplexes. The car is slightly lower, the length is less than about 0.7 meters, 5 rollers instead of 6, as on the GAZ-47, and the same arrangement of balancers (twin balancing tubes, like on the GTT and GAZ-47), 93-litre tanks. All units from GAZ-71, only torsion bars from GAZ-47, respectively, the width of the machine is 100 mm less. The specific pressure is 0.24.