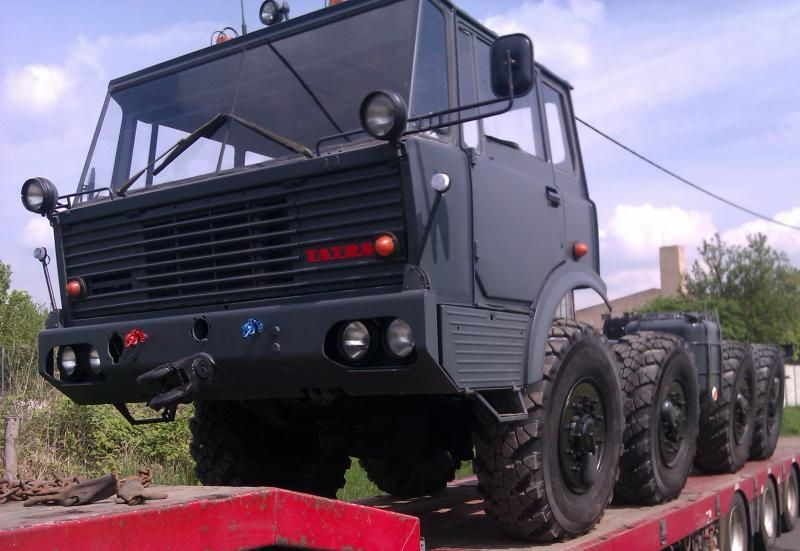 Tatra 813 is a Czechoslovak special heavy off-road truck, manufactured between 1967 and 1982. The basic representative of this type series was mainly the military version of the 8 × 8 KOLOS, which was able to tow trailers up to a total weight of 100 tons. However, civilian versions of 6 × 6 or 4 × 4 were also produced. In fifteen years of production, a total of 11,751 vehicles were built in all modifications, most of which were exported - mainly to the USSR, GDR, Romania and India. Substituted by Tatra 815 models. Tyre size 15.00 R21.

The first functional sample of the T 813 chassis was built by development workers from the design office of the Bánovce nad Bebravou branch plant in 1960. This sample was built as much as possible from aggregates and parts for the Tatra 138 model, from the production of which began at that time. However, it was not a full-fledged car, but only an uncoated eight-wheel chassis with four unprotected seats located on the fenders of the first two axles. The bizarre appearance of this construction was underlined by the use of a motorcycle plexiglass shield in front of the driver's seat. The functional sample was used to gain experience with the first four-axle Czechoslovak car, but further development was slowed down because the Bánovce plant focused on the production of all modifications of the Tatra 111 type and Tatra 141 heavy tractor. Nevertheless the eight-wheel chassis was not forgotten.

At the beginning of 1964, the development of the eight-wheeled military tractor was officially renewed, this time the construction began "on a clean table" and the Tatra 813 prototype, presented in Bánovce as an asset of Tatra economic workers in August 1964, only had basic structural parts twelve-cylinder engine T930 with a capacity of 17,640 cc and a power of 250 hp (T 138 was an eight-cylinder T928 fork with a capacity of 11,762 cc and an output of 180 hp). The engine was followed by a five-speed transmission and two reduction, so the vehicle had a total of 20 gears for forward movement and 4 gears for reverse travel. Thanks to its concept, the car was able to overcome a ditch up to 1.5 meters wide, overcome vertical obstacles up to a height of 60 centimetres and drive with a side tilt of up to 30 °. These parameters are still unique in the world and have not been surpassed by any of the modifications of the following type T 815.

In addition to the chassis, the car also differed from the previous production of the Tatra by the use of simple mounting of wide-profile tires on all axles (with the function of central tire inflation), a spacious advanced trampoline cabin and overall angular vehicle shapes.

By the end of 1964, a total of 4 prototypes were created and serial production began. The first chassis from the 50-piece verification series left the assembly line on Friday, March 24, 1967. In connection with the easing of the political regime in Czechoslovakia, it began to be considered that the military special T 813 could be used in the civilian sector to replace obsolete Tatra 141 cars. (which were based on the almost 30-year-old Tatra 111 design). In 1969, therefore, the department of the chief designer introduced new models of a series of civilian tractors with the characteristics of axles 4 × 4 (for trailers weighing up to 60 t), 6 × 6 (up to 80 t) and 8 × 8 (up to 100 t), which added variants of construction vehicles. They then went into series production as tractors or chassis for cranes, to a lesser extent also as dump trucks (in the 6 × 6 version, replacing the Tatra 147 dump cars, however, only a few prototypes were created). In cooperation with the West German company SEMEX, a powerful airport tractor capable of handling aircraft weighing up to 300 tons was also created.

The basis of the vehicle is (typical for Tatra) a spine chassis with a central support tube and swinging half-axles. It consists of two front (steerable) and two rear axles, while all axles are driven (but the front axle is switchable except for the 8 × 8 version) and all are separated by inter-axle differentials - the entire chassis hides a total of 7 front differentials. Between the second and third axles, an intermediate gearbox is fitted on the spine, on which the main gearbox is mounted. The derived types differ in the absence of the last (for 6 × 6 cars), or the first and last (for 4 × 4 cars) axles. Depending on the type, the individual half-axles are then sprung by leaf springs, torsion bars, bellows springs or various combinations thereof. All half-axles are also equipped with liquid shock absorbers.

The individual axles consist of a gearbox, half-axles, drive shafts and disc wheels of wheel reducers to reduce the stress on the entire drive system. All wheels use exclusively simple tire mounting, in the military versions supplemented by a system of central inflation of tires for combat situations (the compressor was able to repress the tire with twelve shots without deformation) or for easy change of specific pressure in various terrain conditions. The steerable axles are equipped with a fluid booster, identical to the T 138, but with a greater effect on the wheels.

The drive unit of type designation T930 is an air-cooled forked twelve-cylinder (cylinder clamping angle 75 °) with a volume of 17,640 cc (bore 120 / stroke 130 mm), four-stroke diesel with direct fuel injection, OHV distribution with one camshaft for all cylinders. The series engine has an output of 190 kW (258 hp) and a torque of about 990 Nm at 1300 rpm. Depending on the type and load, diesel consumption ranges from 44 litres of diesel per 100 km upwards.

Air cooling is provided by a single fan controlled by a fluid clutch, which together with the thermostat controls the fan speed so that it is able to cool the engine even at full load. Engine lubrication is with a dry crankcase and equipped with an engine oil cooler located in front of the fan on the hinged part of the car hood.

To make it easier to start the engine at very low temperatures, two starters are fitted and the engine can also be heated by an independent diesel heater.

The clutch is a dry friction double plate (for versions 8 × 8 and TP 6 × 6 three-plate) with a booster, it is connected to the gearbox by an articulated shaft.

The transmission has 5 forward gears and 1 reverse gear, with the exception of the 8 × 8 and TP 6 × 6 versions, and is additionally equipped with a two-speed forward gear. The control is mechanical, with the lever located next to the instrument panel on the right side. The second to fifth gears are secured by so-called blocked synchronization. The additional transmission is two-speed, with road and off-road transmission, which are controlled electro-pneumatically by means of a preselection on the gear lever - the exceptions are again versions 8 × 8 and TP 6 × 6, which have only one downshift. Neutral is selected electro-pneumatically by a switch on the instrument panel. By combining these gears, the driver has up to 20 forward and 4 reverse gears available, which can be selected depending on the conditions.

In addition, some versions of the 8 × 8 were equipped with overdrive, which is a unique exception in the construction of trucks - the first stage was a direct engagement (for driving with a heavy trailer), the second served as an overdrive (maximum speed solo vehicle).

Service brakes are drum, air pressure, located in the wheels. Their braking system consists of three independent circuits: the front, rear axle circuit and the trailer brake circuit. The drum parking brake is located on the auxiliary gearbox. The vehicle is also equipped with a relieving engine brake.

In all modifications, the cabin is exclusively of the trambus type and exists in short or double cab versions, with one or two circular manholes in the ceiling. The double cabin can accommodate seven people, including the driver. Between the front seats there is a tunnel for the engine cover, which is thermally and soundproofed. The cabin is equipped with independent diesel heating.

Most military chassis were equipped with a drum winch, which was attached to the frame between the third and fourth axles. The winch was worm with a friction clutch and equipped with a drum brake. The length of the tensile steel rope was 60 m with a diameter of 22.4 mm. The maximum force when the rope was wound was 98 kN and 176.5 kN when unwound. 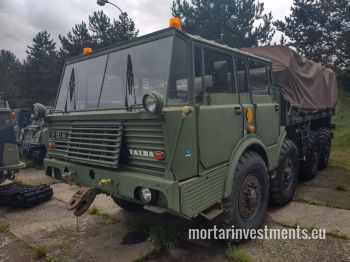 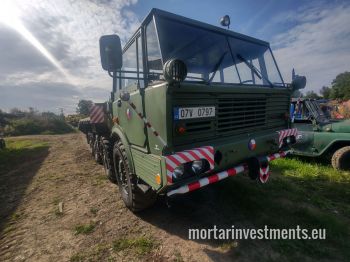