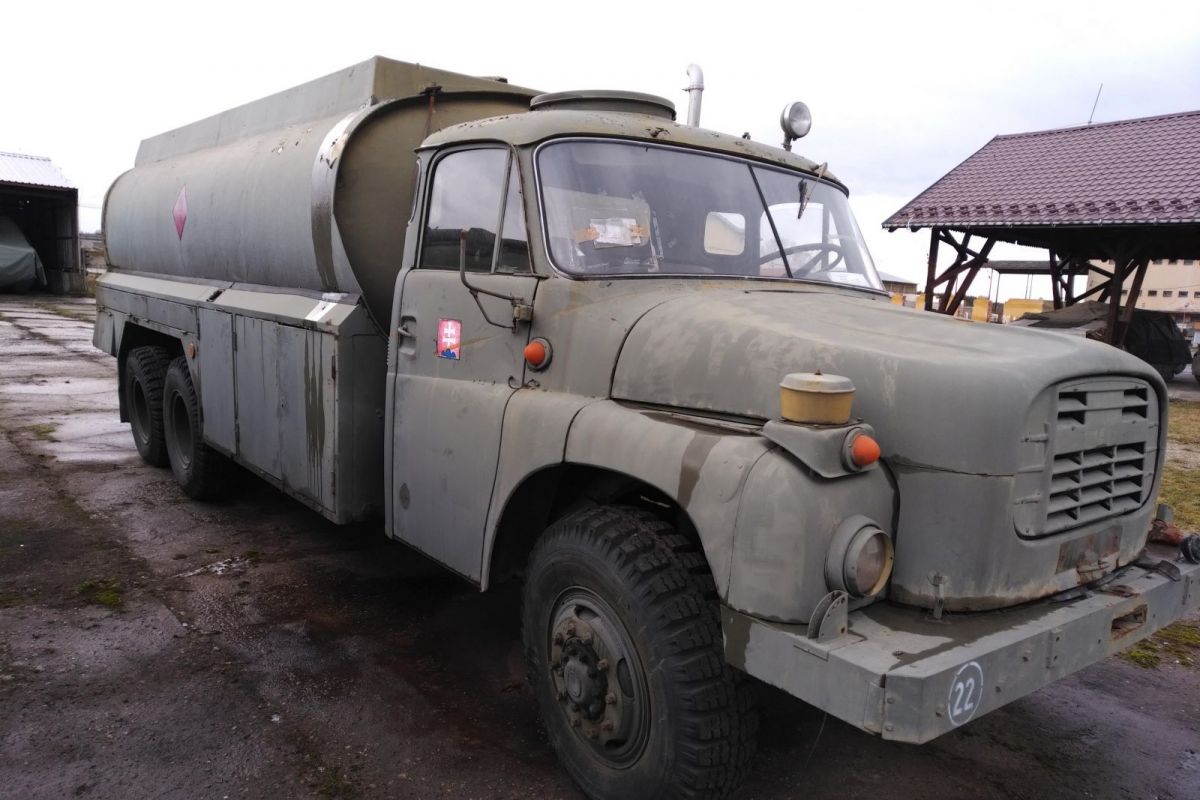 Tatra 148 is a Czechoslovak truck with a 6 × 6 or 4 × 4 chassis with a load capacity of 12 tons, manufactured between 1972 and 1982 by the national company Tatra. In 1969, the production of the verification series of the modernized car with the designation T 148 was started as an innovation stage of the T 138 type series, which it replaced and expanded in many variants. The designers aimed to eliminate the causes of some failures of T 138 cars, increase engine power, transport speed and reliability. Operation in the field allows, in particular, a sufficient clear height of 290 mm, the advantage is a relatively small turning radius.

The basis of the vehicles was a typical Tatra concept chassis, carrying a front axle suspended by torsion bars with adjustable preload, followed by a main and additional gearbox (both in one block), a spacer, a first rear axle gearbox with a spacer and a second rear axle. Both rear axles were suspended by longitudinally mounted semi-elliptical leaf springs. With the exception of the tractor of 4 × 4 semi-trailers - the rear axle was also sprung by torsion bars - all types were three-axle with permanent drive of both rear axles and the possibility of including front axle drive and had axle differential locks. A novelty compared to the previous T 138 was the switchable inter-axle differential.

The service brakes were dual-circuit, air-pressure and acted on all wheels. The emergency and parking brakes acted on the driven wheels. The vehicle was also equipped with a relieving engine brake, which was used to brake and maintain the speed of the car when driving from long descents.

The power unit was a diesel, air-cooled, "V" arranged eight-cylinder engine with valve distribution OHV series T 928, which was significantly modernized and also received a new designation T2 - 928E. The stroke was changed from the original 130 to 140 mm, the drilling remained unchanged. The total displacement increased to 12,667 cm³. Maximum power rose to 148.6 kW (202 hp) at 2,000 rpm. Torque according to engine version: T2-928-1E: 813 Nm, T2-928-17E: 798 Nm at 1200–1400 rpm. Different designs of cars had different engines, which were structurally identical, but for example, military versions differed in the design of injection pumps (performance or limiting regulator). Military versions also had an engine modification that allowed operation on various types of fuels (diesel, gasoline or aviation gasoline) and had a device mounted in the cabin, which was used to inject a flammable mixture into the intake manifold, making it easier to start at very low temperatures. As with the T 138, a switchable engine oil cooler was mounted on the side of the engine. The basic consumption was 31.2 litres of diesel per 100 km. The volume of the fuel tank increased to 200 litres.

Changes to the engine forced the shape of the front hood 138 to be modified to a more angular T 148 at the front with a different mask covering at least partially the direct entry of dirt into the cooling fan closer to the front and its characteristic noise emission in the opposite direction.

The clutch was dry, double-disc, hydraulically operated. The driver's effort was also reduced by the air pressure booster. The gearbox is connected to the engine by a Cardan-shaft, which simplifies the disassembly of components; this method of connection was also necessary due to the fact that the motor is resiliently mounted. The main gearbox is mounted behind the cab above the centre tube and is attached to the auxiliary gearbox at its rear. The gearbox is five-speed, its gears have helical gearing. The gears of the individual gears are in constant engagement. The second to fifth gears are secured by block synchronization to facilitate shifting. Most vehicles were equipped with an auxiliary drive, which was just taken out of the transmission. The drive was converted to "fast" or "slow". The auxiliary gearbox is connected to the central support pipe by flanges. It has two gears, normal (road) and reduced (off-road). Both gears in the auxiliary gearbox were shifted electro-pneumatically using a gear selector; the respective "half-stage" is preselected on the gear lever and, after depressing the clutch pedal, engaged pneumatically, so that there were 10 continuously geared gears for forward travel and two for reverse travel.

The cabin was not very different from the Tatra 138 type, only the front fenders and the entire front hood and the air intake grille to the radiator were different. As with the T 138, the cabin could be heated by independent diesel heating, which could, however, also heat the engine before the start in winter. Special versions in the "Arctic" version had a better-insulated cabin against heat leakage, and the heating was improved.

Production of the T 148 vehicles ended on December 14, 1982, when the last car with this designation rolled off the line. A total of 113,647 of these cars, which still serve very well, were produced in Kopřivnice. From that

of this number, 63,700 cars were exported to 43 countries on five continents. Most of the cars were traditionally picked up by the former Soviet Union. A large number of types of design were produced, for example: