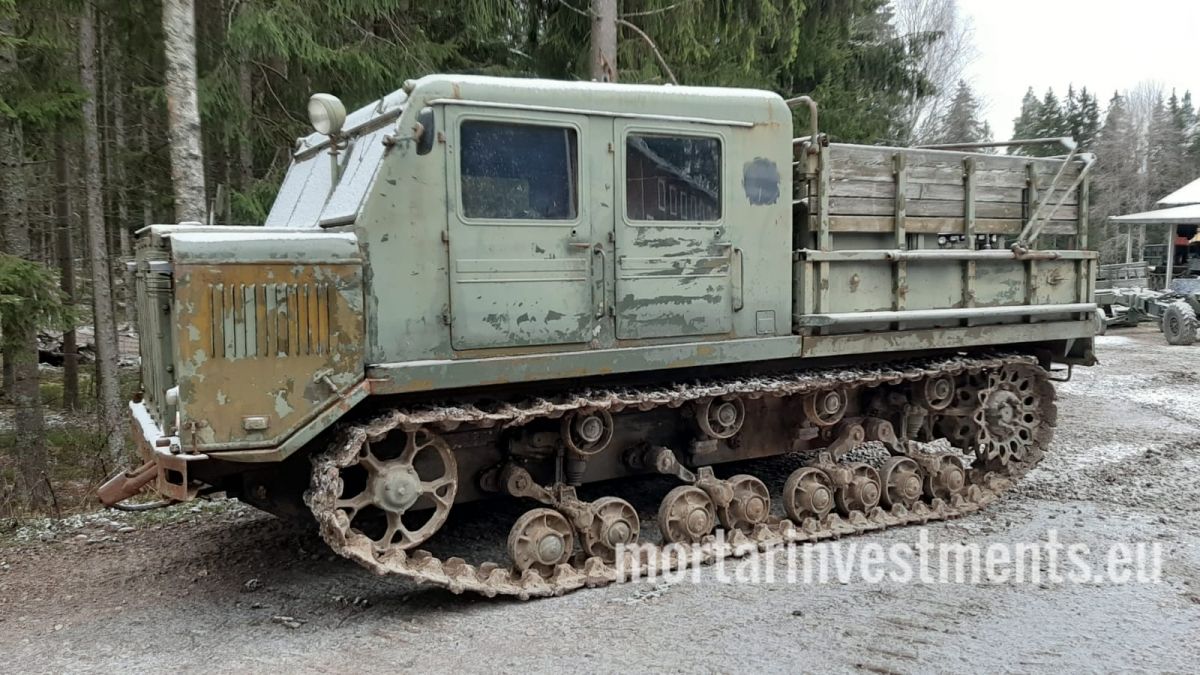 Spare parts for this item available. Please contact us.

At the end of the 1940s there was a need in the Soviet Army, but also in the Soviet economy, for a powerful, all-terrain towing vehicle. In the military sector, this was mainly caused by the increase in the caliber of the artillery, which led to increasingly heavy artillery. In the civil sector, the need developed due to the economic development of sparsely populated and largely impassable areas in the east of the USSR. The AT-S was supposed to close the gap between the heavy AT-T and the lighter AT-L with a trailer load of 16,000 kg and a payload of 3000 kg.

For the AT-S, too, existing assemblies from tank and truck production were largely used. This reduced the development time and simplified production. The chassis had four roller carriages suspended on swing arms on each side, the first and fourth were sprung with vertical coil springs. The drive wheel was at the rear, the idler wheel, which was also used to tension the chain, at the front. The chain is tensioned with four support rollers on each side. The engine was in the front of the vehicle, the change gear and steering gear in the stern. The twelve-cylinder diesel engine W-2, known from Soviet tank construction, was used in a version throttled to 250 hp.

The cabin for the crew is also located in the front part of the vehicle. It offers space for seven soldiers. The platform behind the driver's cab with a load capacity of 3000 kg offers space for equipment, ammunition and, if necessary, other soldiers.

A maximum ground pressure of 0.56 kg / cm² is achieved with the crawler tracks. When loaded, the climbing ability without a trailer is a maximum of 55%, the ground clearance is 400 mm. Without preparation, the vehicle can drive through waters up to 1.0 m deep.

BM-24T
The vehicle was primarily used as an artillery tractor for howitzers of caliber 152 mm and for the heavy flak KS-19. The AT-S also served as a carrier for the multiple rocket launcher system BM-24. This version was called the BM-24T. In the Soviet Army, the AT-S was replaced as early as 1959 by the ATS-59G, whose chassis is based on that of the T-54 tank. In Poland, the Mazur D-350 chain tractor was developed based on the AT-S.

The vehicle was delivered to practically all states that also used the corresponding Soviet weapon systems. Egyptian and Syrian troops also used the AT-L in the military conflicts with Israel. The National People's Army also used the AT-S. Here it was used as a traction device for the Flak KS-19 and the 152 mm ML-20 cannon howitzers. In addition, the chain tractor was also used as a tractor for the gun straightening station GRS-4 and the gun straightening station GRS-9 and with a dozer blade in front of the NVA pioneer troops. After the KS-19 were separated and scrapped at the beginning of the 1970s, the ML-20 had already been replaced by the 130 mm M-46 cannon from the mid-1960s, the AT-S remained for a short time as a traction device Gun erection stations in the troops. Due to the difficult spare parts situation and the high operating costs, however, it was also eliminated there from the mid-1970s and replaced by the Tatra 813.