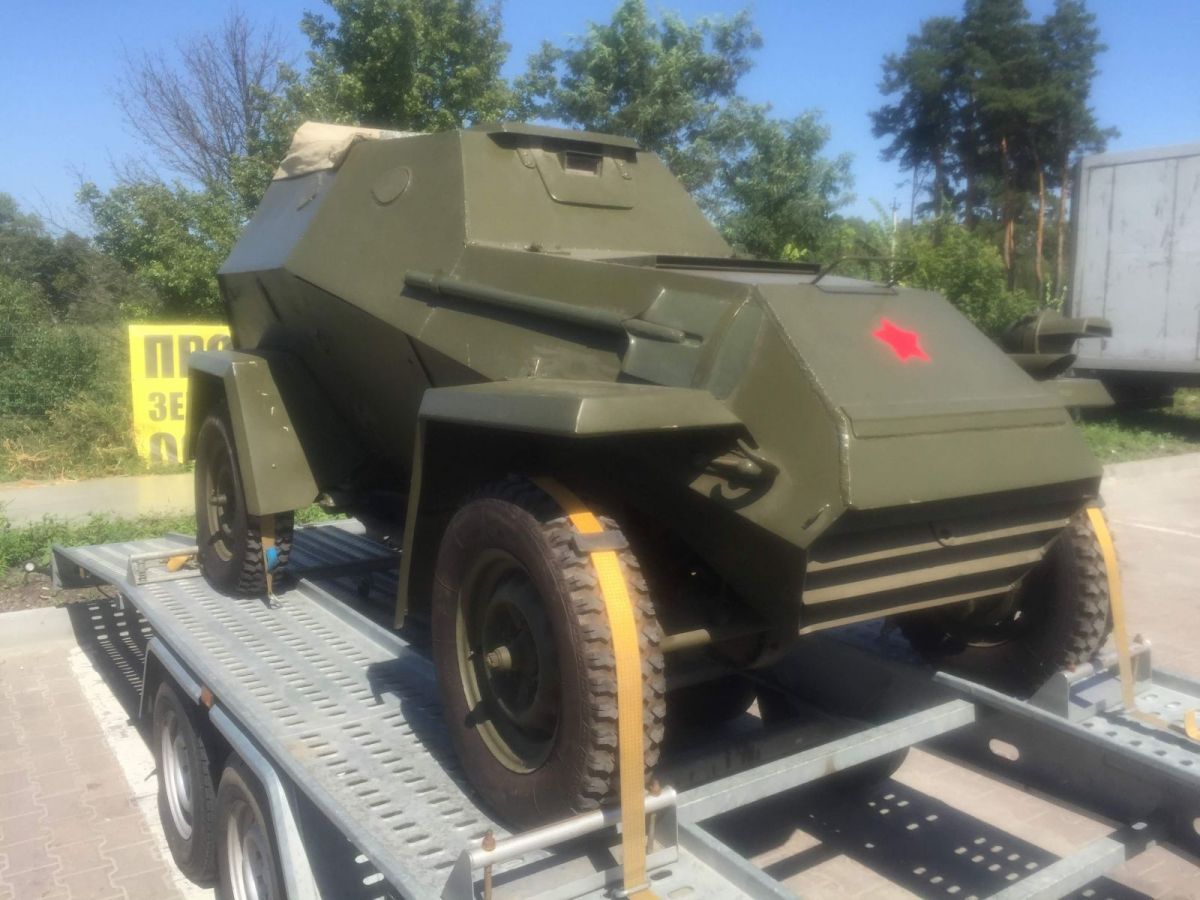 BA-64 had a differentiated bulletproof armour protection. The BA-64 armoured hull was assembled by welding from rolled sheets of armoured steel thick, on machines of early releases, 4, 6, 9 and 12 mm, on all subsequent ones - 4, 6, 7, 9 and 15 mm. In the cross-section, the case had a hexagonal shape, all its surfaces were placed at angles of at least 30 ° to the vertical. The frontal part of the hull was stepped in shape and on the BA-64 was formed by the upper frontal sheet of the control compartment with a thickness of 12, on late-release machines - 15 mm, which was placed at an angle of 40 ° to the vertical; the middle sheet, which served as the roof of the engine compartment, 6 mm thick and located at an angle of 84 °, two lower frontal sheets of 9 mm thickness, located at angles of 30 and 52 °. On late-release machines, the two lower sheets were replaced with one lower, inclined at 32 °. The very bottom of the front of the hull was used to take air to the engine and consisted of 6 mm mutually overlapping armoured blinds. The lower part of the hull side was made of 9 mm thick armoured plates, inclined at a 30 ° slope, and 7 mm on late-release machines. The upper side sheets were also located at an inclination of 30 ° and had a thickness of 6 mm in the area of ​​the engine compartment and 9 mm in the area of ​​the command and combat compartment. The feed of the hull consisted of a 9 mm top sheet, located at an inclination of 30 °, and a 6 mm lower sheet, which had an angle of inclination of 35 °. The bottom and the roof of the body had a thickness of 4 and 6 mm, respectively. 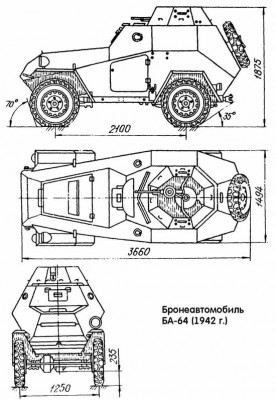 This level of booking provided the machine with protection against conventional rifle 7.62-mm bullets - from all distances, armour-piercing - only for the command and control squad. The upper frontal sheet protected from 12.7 mm conventional bullets at all distances, while the remaining frontal sheets only at distances of more than 500 m. From the armour-piercing bullets, only the upper frontal sheet protected 12.7 mm bullets, and only at distances of more than 800 m. [30] The BA-64B as a whole had the same body shape, but the thickness of the lower frontal sheet was increased to 11 mm, up to 7 mm the thickness of the air intake louvres, up to 8 mm the air intake cover in the roof of the engine compartment, up to 11 mm the lower stern armoured plate, then as the thickness of the top was opposite, reduced to 11 mm. In addition, the BA-64B case was made of armoured steel of grade 77, which was more bulletproof. The landing and landing of the crew on all modifications was carried out through two hatches in the lower sheets of the control compartment, in addition, the commander could carry it through the top of the turret.

The armoured car turret had an octagonal shape in plan in the form of a truncated pyramid open from above. The walls of the turret were located at an inclination of 30 ° and had a thickness of 9 mm on early-release machines and 10 mm on subsequent machines. The turret was located on a turntable, which rested on the floor of the fighting compartment, it had no communication with the roof of the hull on the machines of early releases, but on the machines of late releases, four rollers supported on the roof were added to the turret to increase stability. The turret was rotated manually, pushing it to the supporting column of the arc. To fix in the desired position, the turret was equipped with a hand brake-clamp. The top of the turret on machines of early releases could be covered with folding metal grids, later eliminated, as well as a tarpaulin tent for protection from the weather. In addition, the height of the turret on machines of later releases was increased from 275 to 290 mm.

The main armament of the BA-64 was the 7.62 mm machine gun DT-29. The initial speed when shooting with a light bullet was 840 m / s, and the rate of fire was 600 rounds per minute, with a combat rate of fire up to 100 rounds per minute. The mass of a machine gun without a magazine was 8.35 kg. The machine gun was installed in the frontal part of the turret on a turret, which allowed its vertical aiming in the range from −36 to + 54 °. A machine gun fired at ground targets through a vertical embrasure, while horizontal guidance, except for the narrow sector provided by the embrasure, was carried out by turning the turret. For firing at aerial targets, the turret could, with the help of a flywheel, rise beyond the top edge of the turret, which allowed its free rotation. Also, the machine gun could be removed for use outside the machine, for which it was equipped with removable bipods.

To aim the machine gun when firing at ground targets, a standard diopter sight was used, which allowed targeted shooting at fixed distances of 400 m, 600 m, 800 and 1000 m. The maximum aiming range was 1500 m. When firing at air targets, a ring sight was used, the maximum reach of the machine gun at the height was 500 m. The ammunition load of the machine gun was 1260 rounds in 20 disk magazines of 63 rounds, on machines equipped with the radio station it was reduced to 17 stores or 1071 rounds. In addition to the machine gun, for close defence, the BA-64 was equipped with 6 F-1 fragmentation grenades, as well as personal crew weapons, such as submachine guns.

Means of observing the terrain for the driver on the BA-64 were limited to a viewing hatch located in the upper frontal armour plate, in which for observation in combat conditions a periscope specular observation device was installed with a triplex protective glass and an internal armoured valve, similar to that installed on the T-light tank 60 and providing an overview of only the frontal sector. On the BA-64B, two inspection hatches with armoured dampers located in the upper side sheets of the control compartment were added to this. The machine commander could observe through the open top of the turret, or through the loophole of the machine gun; In addition, two viewing slots with armoured flaps, armoured visors and protective triplex glass were located in the side sheets of the turret. On the BA-64 of later releases and the BA-64B, they were replaced by specular periscopic observation instruments similar to the device of the driver.

Most of the BA-64s produced did not have any special means of external communication; only a small part of the machines were equipped with radio stations of various models. On the BA-64, radio stations of the RB-64-142200 model were installed, or close to it according to the characteristics of 12-RP. On the BA-64B, a 12-RP or 12-RPB radio station was installed, which differed from the first one by the presence of a short tank-type antenna and a headset instead of a telephone handset, which increased communication efficiency. Both versions of the 12-RP provided a communication range of 8-15 km, depending on the terrain, in the telephone and up to 30 in the telegraph; in motion, the communication range was reduced to 4 km, and the radio station on the go in practice was possible only for the 12-RPB.

The BA-64 powerplant was generally borrowed from the base GAZ-64. The armoured car was equipped with an in-line 4-cylinder four-stroke carbureted liquid-cooled engine, model GAZ-MM. Having a working volume of 3280 cm³, the engine developed a capacity of 50 litres. with. at 2800 rpm The BA-64 was distinguished from the base car by changes in the design of engine systems, which, if necessary, allowed it to work on low-grade gasoline and oils. The capacity of the BA-64 fuel tank was 90 litres. BA-64B was distinguished by the installation of forced up to 54 litres. with. engine and modified carburettor design.

The composition of the BA-64 transmission included:

The transmission of all serial BA-64s was identical, with the exception of the introduction in February 1943 of a gearbox locking mechanism that prevented the simultaneous engagement of first gear and reverse gear.

The BA-64 had a 4 × 4 wheel arrangement. The front-wheel suspension consisted of two-quarter elliptical springs and a hydraulic shock absorber for each. The suspension of each of the rear wheels consisted of a semi-elliptical spring, two single-acting hydraulic shock absorbers and was equipped with a torsion stabilizer of lateral stability. Since February 1943, an additional two shock absorbers on the front wheels were added to the suspension, and springs were also strengthened. The BA-64B was distinguished by an extended track, which increased the stability of the machine and allowed to abandon the side stabilizer. 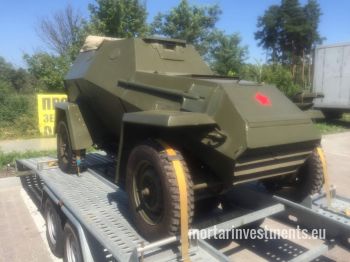