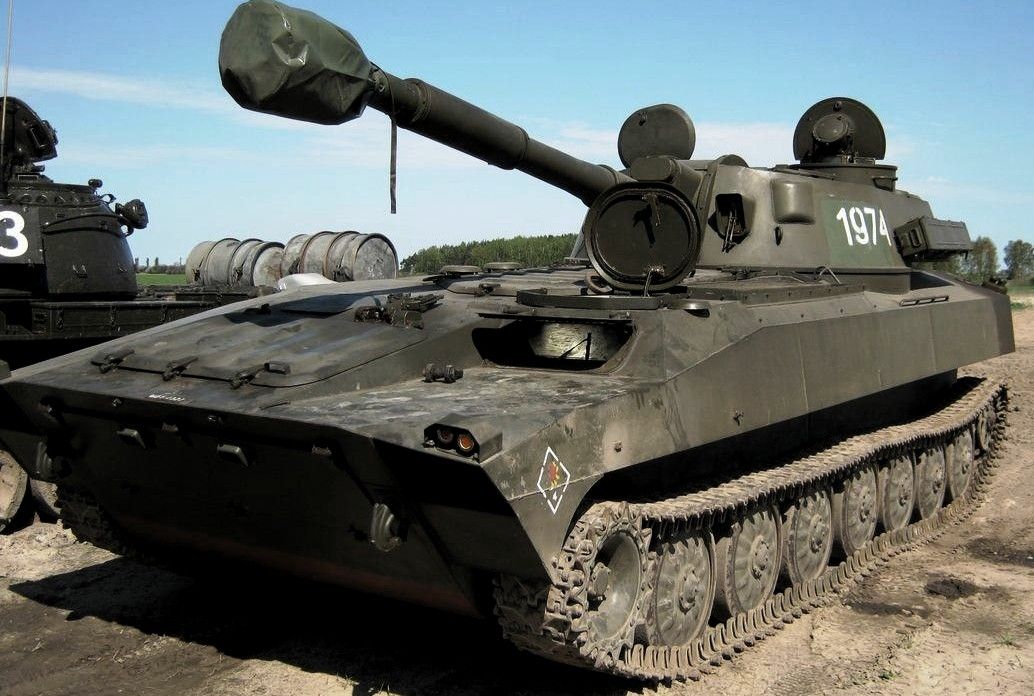 Not many people have a howitzer in their collection. The base for this vehicle is an MT-LB. Engine spares easy to procure.

In 2S1, a V-shaped 8-cylinder four-stroke YaMZ-238N (same as in KRAZ-255B) liquid-cooled diesel engine with gas turbine supercharging with a power of 300 hp was installed.

The transmission is mechanical, dual-flow, with two planetary-friction rotation mechanisms. It has six forward and one reverse gear. The maximum theoretical speed in sixth forward gear is 61.5 km / h. In reverse gear, speeds of up to 6.3 km / h are provided.

The chassis of the 2S1 (SAU-122) is a modified chassis of the MT-LB multi-purpose conveyor tractor. In order for the chassis to be able to provide the specified parameters, the design of the MT-LB chassis has undergone significant processing. Compared to the base machine, an additional pair of track rollers has been introduced into the chassis. Thus, the chassis consists of seven pairs of rubberized road wheels. There are guide wheels in the rear of the machine, and drive wheels in the front. The caterpillar track consists of small links with hinges connected by fingers. The width of each truck is 350 mm with a pitch of 111 mm. 2S1 suspension - individual torsion bar. Two-way hydraulic shock absorbers are installed on the first and seventh track rollers.

The Kharkiv Tractor Plant named after Sergo Ordzhonikidze was appointed the lead developer of 2S1, the 2A31 howitzer (internal designation D-32). In August 1969, the first four experimental 2S1 self-propelled guns entered field tests. Tests revealed a high gas contamination of the fighting compartment. At the same time, a similar situation developed with the 152-mm divisional self-propelled howitzer 2S3. At the same time, for both self-propelled artillery mounts, cartwheel versions of howitzers were developed. On the basis of 2A31, a 122-mm howitzer D-16 with a shotgun loading was developed. Instead of a wedge lock, a chain rammer, and charges in the sleeve, a piston lock, a pneumatic rammer, and slug charges were used in the D-16. However, tests showed that the shortcomings of the new D-16 howitzer are similar, since the flames of the shots remained the same, while maintaining the same accuracy and firing range. In addition, it was discovered inconvenience when working with charge cases, as well as design flaws of the pneumatic rammer, as a result, the rate of fire remained at the level of the base gun. Further improvement of the design of the D-16 led to the creation of a modernized model under the D-16M index, which showed an increase in the firing range of a high-explosive fragmentation projectile up to 18 km, due to the increased camcorder and the use of more powerful shotgun charges.

In 1971, the 3rd Central Research Institute, within the framework of the R&D "Development", reviewed and analyzed the results of work on the canopy options of 122-mm and 152-mm howitzers. Despite the obtained indicators, 3 Central Research Institute gave the conclusion that it is inexpedient to conduct further research on the slug version of the 2A31 howitzer. The main reason was the lack of a technical solution at that time, which made it possible to create and put into operation reliable and safe charges in a rigid cap or a burning sleeve. The scientific and technical backlog of the research was recommended to be used when creating new 122-mm high-explosive fragmentation shells with an improved aerodynamic shape. The problem of gas contamination of the combat compartment of the 2S1 self-propelled guns was solved in a different way, namely, by using a more powerful ejector and cartridges with improved obturation. In 1970, by a resolution of the Central Committee of the CPSU and the Council of Ministers of the USSR No. 770-249 of September 14, after improvements, the self-propelled artillery 2S1 Gvozdika was adopted by the Soviet Army. In 1972, it passed state tests and adopted the 4P134 parachute platform, which had a flight weight of up to 20.5 tons. On this platform, using the PS-9404-63R five-dome parachute system, it was planned to land 2S1 self-propelled howitzers. The system as part of the 4P134 platform, the PS-9404-63R parachute system and the 2S1 self-propelled guns passed the full test cycle, but was not received by the Airborne Forces in connection with the development of the 122-mm Violet 2S2 self-propelled howitzer

Self-propelled howitzer 2S1 "Carnation" is made according to the turret scheme, which has become a classic for self-propelled artillery. The car body is welded from steel armoured rolled sheets, completely tight, and allows you to overcome swimming water barriers. The hull is divided into three compartments: power (motor-transmission), control, and combat. In the front of the hull on the starboard side there is a motor-transmission compartment. To his left is a driver’s seat with chassis controls. In the middle and rear parts of the hull is the fighting compartment. On the roof of the hull, a welded turret with a rotating basket of the fighting compartment is installed on a ball epaulet. A gun was installed in the turret, as well as crew seats. The starter’s seat is located on the starboard side, as well as stacking under the cartridges with charges, on the left side in the front of the turret there is a gunner’s seat and sights. Behind the gunner is the place of the self-propelled gun commander. The commander’s place is equipped with a turret mounted on the roof of the turret. In the niche of the turret there are two stackings with charges and shells for cumulative ammunition. In the aft part of the hull installed under shells and charges of the main gun. Giving in laying can be carried out from soil through a special aft hatch. Reservation SAU 2S1 provides bulletproof and anti-shatter protection for the crew. The thickness of the sheets of the hull and turret reaches 20 mm.

The main armament of the 2S1 self-propelled guns is a 122-mm 2A31 howitzer. The gun is fully unified in terms of ballistic performance and ammunition used with a 122-mm towed howitzer D-30. Barrel 2A31 consists of a pipe, breech, ejector, and muzzle brake. The length of the pipe is 4270 mm. 36 grooves with progressive steepness ranging from 3 ° 57 ′ to 7 ° 10 ′ were made on the inside of the trunk over a length of 3400 mm. The length of the charging chamber is 594 mm. The total mass of the barrel group is 955 kg. The shutter of the vertical-wedge gun is equipped with a semi-automatic re-cocking mechanism. A tray with a holder is installed on the wedge, which prevents the projectile from falling out of the barrel at large elevation angles, and also facilitates manual loading. When the shutter is opened, the holder is automatically sunk into the wedge and does not interfere with the extraction of the sleeve. The total mass of the bolt group is 35.65 kg. Anti-recoil devices consist of a hydraulic brake of the spindle-type recoil filled with Steol-M or POZH-70 liquid and a pneumatic recuperator charged with nitrogen or air. To relieve pressure during operation in different temperature ranges, a spring-type compensator is installed on the recoil brake. Rollback brake cylinders are fixed in the breech of the gun. The maximum rollback length is 600 mm. The gun pipe is fastened to a cradle consisting of two clips. In the front ferrule is a casing with fixed wheel chocks. In the middle part there are mounts for the armoured mask with pins. A guard is mounted to the back of the cradle. On the right cheek for the commander there is a mechanism for blocking the manual descent of the gun, on the left - the lever system with manual descent. Between the cheeks a hinged part of the fence with an electromechanical chambering mechanism was installed.

The main ammunition of the 2A31 howitzer includes high-explosive shells 3OF56 and 3OF56-1 [sn 3] with a contact fuse RGM-2M, 3OF7 and 3OF8 [sn 4] with an AR-30 radio fuse, as well as 3OF24, 3OF24Zh [sn 5], 53-OF-462 and 53-OF-462Zh [sn 6], which can be equipped with both contact fuses RGM2 or V-90, and radio fuses AR-5. The shells have an initial speed of 690 m / s at full charge and a maximum firing range of 15.2 km. For 2S1, the Kitolov-2M adjustable shells have been developed that have the ability to destroy armoured vehicles at locations where launchers, long-term defensive structures, bridges, and crossings are concentrated. In addition, it is envisaged to use lighting and smoke shells, as well as jamming equipment. To combat armoured vehicles in the standard ammunition 2S1 there are 5 cumulative rotating ammunition 3BP1. Ammunition is capable of penetrating 180 mm homogeneous armour steel at distances up to 2 km. In addition, firing at armoured targets can be carried out by non-rotating cumulative shells 3BK6 and 3BK13 (piercing 400 and 460 mm of homogeneous armour steel, respectively). To combat the enemy’s manpower, the SAU 2S1 ammunition has a 3Sh1 shrapnel shell equipped with striking arrow-shaped elements, which, when the ammunition breaks, fly apart at an angle of 24 °. In addition, for the 122-mm howitzers, M-30 and D-30 in the USSR, fragmentation-chemical and chemical shells equipped with various toxic substances were developed. In order to increase the maximum firing range in Croatia, a new 12 was developed.

To guide the gun, to carry out reconnaissance of the area during the day and at night, a combined sight TKN-3B with a searchlight OU-3GA2, as well as two prismatic periscope observation devices TNPO-170A, are installed in the commander’s cupola. The gunner’s place is equipped with a 1OP40 artillery panoramic sight for firing from closed fire positions and an OP5-37 direct-fire sight for firing at observable targets. On the right side of the turret, in front of the loader’s hatch, an MK-4 rotating monitoring device is installed. The driver’s mechanic’s place is equipped with two prismatic observation devices TNPO-170A with electric heating, as well as a night vision device TVN-2B for driving at night. In front of the driver’s seat is a sight glass with electric heating and a protective armour-cover.

External radio communication is supported by the radio station R-123M. The radio station operates in the VHF band and provides stable communication with similar stations at a distance of up to 28 km, depending on the antenna height of both radio stations. Negotiations between crew members are carried out through P-124 intercom equipment.