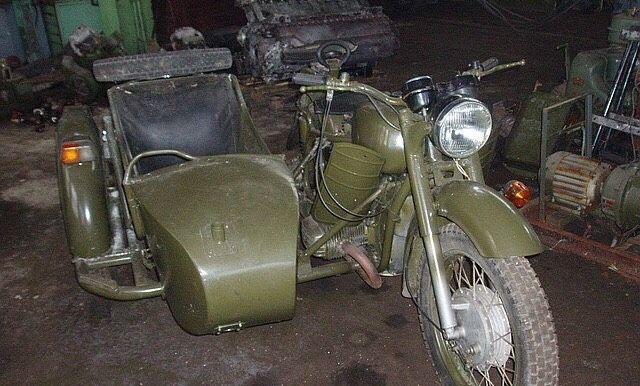 It was produced in a large series from 1941 to 1960 at the plants MMZ (Moscow), Sickle and hammer (Kharkov), GMZ (Gorky), IMZ (Irbit), Krasny Oktyabr (Leningrad), KMZ (Kiev). Originally intended exclusively for military purposes, and until the mid-50s, the motorcycle did not go on civil sale.

Each M-72 was a carrier of small arms, therefore, according to the classification of the GABTU of the Red Army, it was classified as "an armoured vehicle". In total, more than 8500 motorbikes were produced. It was made both with a sidecar and in a single version.

In the USSR, the decision to produce a special army motorcycle was made in early 1940. Under the leadership of N.P. Serdyukov, who had an internship at the BMW plant from 1935 to 1940, a specialized design bureau for heavy motorcycle construction was created on the basis of the Moscow Iskra pilot plant. The BMW R 71 (BMW-750) motorcycle, which by that time had worked well in the Wehrmacht, was chosen as a model for full copying. Five motorcycles were anonymously purchased in Sweden. Since the spring of 1941, the production of a motorcycle under the M-72 brand was launched at the Moscow Motorcycle Plant (MMZ). By cooperation, ZIS developed documentation and supplied engines, KIM (now AZLK) - gearboxes, GAS - a driveshaft and side carriage. The Moscow Motorcycle Plant produced motorcycles until 1951. The Kharkiv plant became another production base; the Kyiv factory of medical instruments supplied it with engines. In Leningrad, the factory "Red October" was also entrusted with the production of M-72. On February 25, 1942, M-72 motorcycles began to be manufactured in Irbit, where equipment from MMZ, KiM, ATE-1, and the ZiS engine shop were evacuated. The main design bureau also moved from Moscow to Irbit. It was headed by Alexander Minovich Fedorov, among the designers were I.I. Okunev, N.A. Kukin, V.V. Bekman, testers S.I. Karzinkin and B.V. Zefirov. At the same time, the Krasnaya Etna factory, called the Gorky Motorcycle Plant, launched the production of M-72 motorcycles. In parallel with IMZ, starting in 1951, began to make motorcycles M-72 and the Kyiv Motorcycle Plant (KMZ). Later, he embarked on his own path of development of the design. There were no differences in the design (and even in the emblems!) Of the M-72 motorcycles in Moscow, Irbit, Leningrad, Kharkiv or Gorky. Since 1955, M-72 motorcycles began to be sold to the public. The civilian version of the IMZ plant was distinguished by an improved engine, reinforced wheels and frame, torsion bar suspension of the stroller wheel, a new colour scheme and the inscription "Irbit" on the tank. However, all of these civilian motorcycles were registered in the military enlistment office and were subject to requisition in wartime. 8.5 thousand motorcycles were produced.

The prototype design (BMW R71) was focused on mass production and at the same time contained many technical innovations that were not previously used on Soviet motorcycles. This is a duplex frame, foot shift, a spring suspension of the rear wheel, a telescopic front fork (after the war, a lever fork was installed on the latest M-72 series), a Cardan drive, and the power of each cylinder from its own carburettor.

Opposed arrangement of cylinders in the engine ensured not only its good balance, but also the low centre of gravity of the whole motorcycle. At M-72, he was lying at a height of 592 mm. All auxiliary units (breaker, oil pump, generator) on the M-72 were driven by gears, cast-iron cylinders were coated with heat-resistant black paint, the connecting rod bearings of the crankshaft were roller, and the main ones were a ball. The connecting rods did not sit on the common neck, but each on its own. Therefore, the left cylinder in the direction of the machine is shifted forward by 39.2 mm relative to the right. In the interest of reducing the length of the crankcase and, consequently, its mass (with a box, it weighed 75 kg), the crankshaft on the M-72, like the prototype BMW-R71, is double-supported, and its middle cheek is relatively thin (18 mm). The M-72 motorcycle stood out among its peers with control levers, the ends of which did not look outward, but inward: with falls, the risk of damage to them decreased. When driving with a stroller, it sometimes turned out to be convenient to shift gears not with the pedal, but with the short lever located on the right side of the box with a bump at the end.

Bags for ammunition and spare parts, special brackets with a rotary device for fixing a light machine gun (swivel) were installed on the motorcycle. The Degtyarev machine gun was fastened with bipods to the swivel plate, which facilitated its transportation and allowed firing from a place and even on the move. Tubular brackets in front and behind the stroller, into which the swivel was inserted, made it possible to fire both along the motorcycle and back. In a very limited number, the troops also received modifications with an 82-mm mortar installed instead of the stroller body.

In 1949, a double air filter was introduced - mesh and inertia-oil. Since 1950, instead of the relay regulator PP-1, motorcycles began to be equipped with a new device PP-31. Then, in 1952, the advanced G11A generator was introduced. Its power both in the predecessor (G11) and in the subsequent model (G414) remained, however, unchanged.

Since 1956, IMZ switched to the M-72M model. Its main difference is among the engine improvements the replacement (since 1955) of the front camshaft bearing (instead of the sleeve - ball). On the undercarriage: the frame is reinforced, the main gear reducer is changed, the wheels are reinforced: a stamped “lace” crown appeared on the brake drum for more reliable fixing of the spokes. To avoid blocking the wheel with sticky dirt, the front flap is raised and secured to the sprung portion of the front fork. The motorcycle received a new stroller.

Further development of the M-72M did not happen, since IMZ switched to the M-61 model with an overhead valve engine.