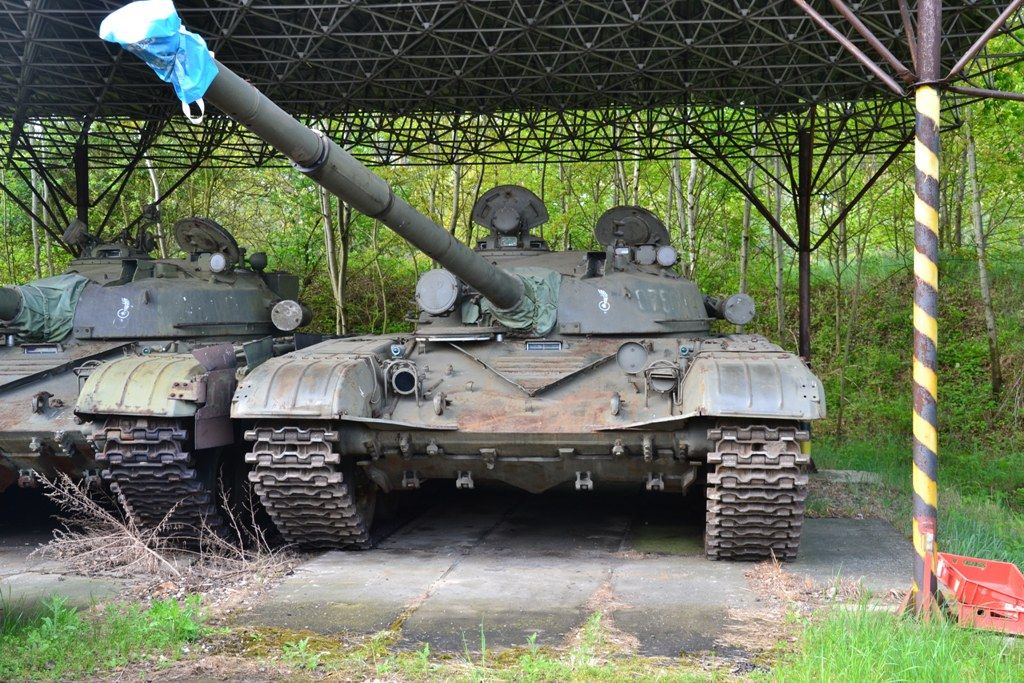 Buy most recognisable Russian tank in America, the United Kingdom or anywhere else.

A T-72 is the most modern Russian tank you can actually buy. They're not cheap, nor are there spare parts. Contrary to Russian standards, its transmission is automatic, which makes driving comfortable. The engine still goes in the T-34 line. It is a direct successor of T-55 line tanks. Turbos give it a boost - you can quickly drive it at 80 km/h, and its acceleration is impressive. Readily transportable on a low-deck.

T-72 Soviet main battle tank for sale by MORTAR. The pricing of these tanks is rather high.

The most massively tank of the second generation. Adopted by the Armed Forces of the USSR since 1973. The T-72 was designed and manufactured by Uralvagonzavod in Nizhny Tagil. The chief designer of the machine is V.N. Venediktov. T-72 is in service with the CIS countries, exported to the Warsaw Pact states, Finland, India, Iran, Iraq, Syria. T-72 modifications were licensed in Yugoslavia (M-84), Poland (PT-91), Czechoslovakia, and India, which exported them.

History of creation and production in Russia

The development of the T-72 began in 1967. In the course of further work, in 1968-69, comparative tests were conducted of T-64A tanks with a B-45 engine with an ejection cooling system (developed by the Kharkiv Design Bureau of Mechanical Engineering) and samples with a B-45 engine with a fan cooling system (development of a design office in Nizhny Tagil) and a 22-shot automatic gun loader. The latter showed better results.

In November 1969, B-46 engines with a capacity of 573 kW (780 hp) and a chassis of a new design began to be installed on these machines. A prototype manufactured with the indicated changes was assigned the index "Object 172M".

On August 7, 1973, a T-72 tank was adopted by the joint decision of the Central Committee of the CPSU and the Council of Ministers of the USSR No. 554-172. It was produced in the USSR and Russia from 1974 to 1992 at the Uralvagonzavod and Chelyabinsk Tractor Plant.

In addition to the USSR, the T-72 was produced in Czechoslovakia, Poland, Yugoslavia, India, and Iraq:

After the collapse of the USSR, the T-72 tank was produced under license in India, Iran, and Poland.

The T-72 has a classic layout, with the engine-transmission compartment in the rear, combat compartment in the middle, and the control compartment in the front of the machine. The crew of the tank consists of three people: the driver, gunner, and commander, who also performs the functions of the loader after spending ammunition in the automatic loader. After the shot, the air is automatically cleaned of gases in the fighting compartment and the ejection of pallets from shells through the hatch in the turret.

The T-72 has been in service for over 40 years. Dozens of countries around the world operate this tank. Deeply upgraded versions of the T-72B - T-72B3, especially the T-72B3M - meet the requirements of modern warfare.

Placement of crew and ammunition inside an armoured space: 1 - driver, 2 - commander, 3 - gunner and 4 - ammunition

T-72 has a differentiated anti-shell armour protection. The armoured hull of the tank is a rigid box construction assembled from sheets and plates of rolled homogeneous armour steel and combined armour. The frontal part of the tank consists of two wedge-converging armour plates: the upper one, located at an angle of 68 ° to the vertical and the lower one, situated at an angle of 60 °. On the T-72, the top plate is made of combined armour, consisting of 80 mm steel outer, 105 mm fiberglass and 20 mm steel inner layers, and the bottom plate is made of rolled 85 mm homogeneous armor steel. The reduced thickness of the upper frontal part is 550 mm. Its protective ability, according to various sources, is equivalent to 305 to 410 mm (an indicator of the resistance of the American M1 Abrams tank against sub-caliber shells, more than 550 mm on the forehead of the tower)  homogeneous armor steel against sub-caliber and from 450  to 600 mm against cumulative projectiles. The rest of the hull is made entirely of rolled homogeneous armor. The vertical sides of the hull have a thickness of 80 mm in the area of ​​the control and fighting compartment and 70 mm in the field of ​​the motor-transmission, the hull feed consists of upper and lower armored plates and two stamped gear cases. The roof of the hull consists of two armored plates, and the bottom has a trough-like shape and consists of three stamped parts having some stampings to increase rigidity. The engine-transmission compartment is separated from the combat transverse armored partition. On each side of the tank, four rotatable screens made of 3 mm stamped sheets of aluminum alloy are installed to protect against cumulative ammunition. The screens are fixed on the fenders and deployed in a combat position at an angle of 60 °, and in the marching, for safety, are pressed to the dust shields. Reservation of tank towers of the first series is monolithic. The monolithic armoring of the T-72 tower was considered its main drawback, so in 1979 the T-72A tank with combined tower armor was adopted.

During the serial production of the tank, his reservation was repeatedly strengthened. Since 1980, the thicknesses of the layers of the upper frontal part were redistributed on the T-72A, amounting to 60 + 100 + 50 mm, also, the piece was reinforced by welding a 30-mm armor plate  The upper frontal part of the T-72A hull is equivalent, according to various sources, from 360 to 420 mm  armored steel against sub-caliber shells and from 490 to 500 mm against cumulative ammunition. A continuous rubber-fabric screen replaced folding anti-cumulative shields for the entire length of the side. On the T-72B, frontal armoring was again strengthened, including by adding a 20-mm armor plate. Besides, the T-72B received the "Contact" dynamic protection kit, which consisted of 227 containers mounted on the upper frontal part of the hull, the forehead of the tower, and the front half of the sides of the hull, turret and roof of the tower. A similar dynamic protection, characterized by the arrangement of elements on the tower (wedge, as on other domestic tanks with the "B" index in the designation), was installed on the T-72A since 1985 during their repair, after which the modernized tanks received the designation T-72AV. The armor resistance of the upper frontal part of the T-72B case by Western experts is estimated as equal to 570 mm of armor steel against anti-caliber shells and 1100 mm against cumulative ammunition, taking into account mounted DZ type Contact. On the T-72BA modification, a more advanced built-in dynamic protection was installed.

Changes were also made to the tower on the T-72A, heat-treated quartz filler ("sand rods") appeared, aluminum shields were replaced by continuous rubber-fabric side screens, on the T-72B the tower filler was replaced by blocks with reflective elements.

The primary weapon of the T-72 was a 125-mm smoothbore gun D-81TM (GRAU index - 2A26M). The barrel length of the weapon is 48 (50.6 2A46M) calibers. The 7.62-mm PKT machine gun was paired with the cannon, the NSVT-12.7 Utyos machine gun was used as an anti-aircraft machine gun on an open turret. At the same time, a significant simplification was made compared to a similar installation of the T-64 tank - the remote control of the anti-aircraft gun was excluded the machine gun, and the PZU-5 optical anti-aircraft sight was abolished, so the machine commander can only fire from the anti-aircraft installation with the sunroof open, directing the installation manually, using the unobstructed sight, stored "in the same way" in a special installation on the turrets. The T-72A mounted gun 2A46, compared with 2A26M, increased accuracy and survivability of the barrel. On the T-72B introduced KUV (complex guided weapons) 9K120 "Svir", which was not installed on all tanks.

T-72 - was equipped with an R-123M radio station (assembled according to the transceiver scheme, the operating frequency range of the radio station is divided into two subbands: 20.0 - 36.0 MHz and 36.0 - 51.0 MHz, the radio station can be tuned to 4 pre-prepared frequencies (ЗПЧ)), the R-124 intercom, for four subscribers, the TPU-A device, and the A-4 device for connecting an external airborne outlet. There are two TNP-160 devices in the commander's cupola, and the TKN-3 commander's observation device, the TPN-1-49-23 night sight, daytime TPD-2-49 rangefinder sight, the L-2AG "Luna" illuminator with an IR filter is used as an IR light source. NSVT is equipped with a K10-T collimator sight.

T-72B - the R-173 radio station was installed (operating frequency range 30 - 75.9 MHz), on the commander's version additionally, as before, the HF station R-130 was installed; the 1A40-1 sighting system was installed, which includes the TPD-K1 rangefinder day sight, the 1K13-49 complex (KUV 9K120 Svir introduction, rocket guidance by the laser beam, the T-72B is quite easy to distinguish from the T-72B1 precisely by night sight, on the T-72B1 there is no shaft for the emitter).

Modernization of the manufacturer's plant for the OMS.

The commander's device is a PNK-4SR or T01-04 type day-night sighting and observation complex. The identification range is 4000 by day and 1000 meters by night.

On the T-72, various models of V-shaped 12-cylinder multi-fuel four-cycle diesel engines of liquid cooling of the family, which is the development of B-2, were installed. The T-72 was equipped with a V-46 engine with a centrifugal driven supercharger, which developed a maximum power of 780 liters at 2000 rpm. The B-46-6 engine was installed on the T-72A, and since 1984, the 840-liter B-84 engine. The engine of the V-84-1 model was installed on the T-72B.

The engine is installed in the engine compartment in the rear of the tank across its longitudinal axis, on a foundation welded to the bottom. The fuel system includes four internal and five external fuel tanks. One of the inner tanks is located on the floor in the aft of the fighting compartment, while the other three are in the control compartment on both sides of the driver. All five external tanks are located on the right fenestrated shelf. The capacity of the inner tanks is 705 liters, while the outer - 495 liters. In addition to them, two additional barrels can be connected to the fuel system, fixed on the stern of the tank, with a total volume of 400 or 500 liters, depending on the size of the barrel. As fuel, diesel fuel of the DL, DZ and DA grades, A-66 and A-72 gasolines and T-1, TS-1 and TS-2 kerosene can be used.

Suspension rollers independent, torsion bar. The undercarriage of each side consists of 3 support rollers and six rubber track rollers with balancers and paddle shock absorbers on the first, second, and sixth, guide roller, and rear-wheel drive. The tank is equipped with a self-digging device, which is put into operation in 2 minutes. 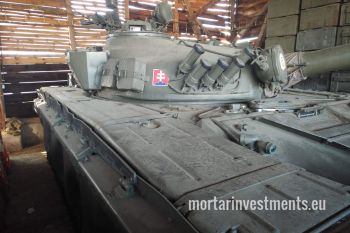