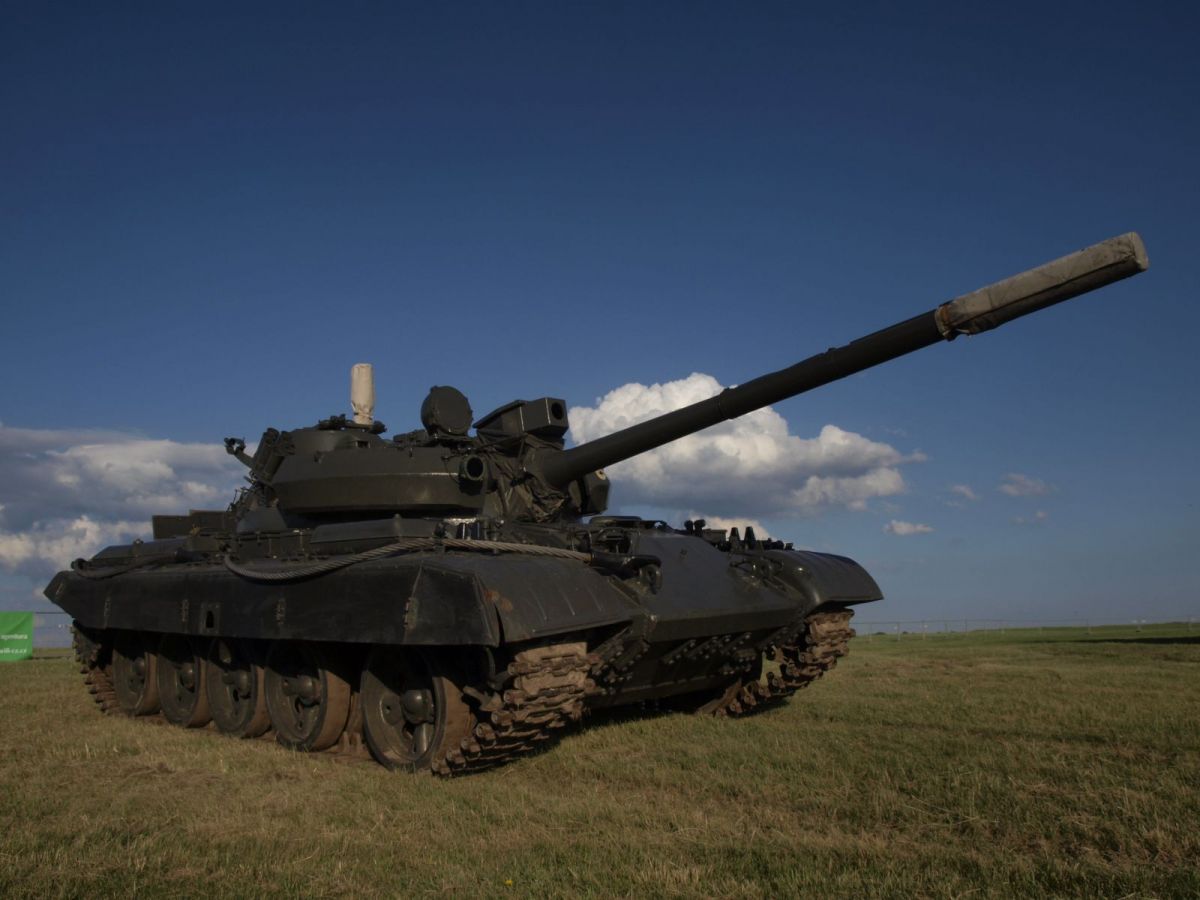 Top-notch Soviet tanks T-55 for sale. Buy a mortal Russian Panzer in the USA, in the UK or at another place.

All T-55 tanks we sell are of Czechoslovak origin.

The tank was presented to the public on May 9, 1958 and officially accepted into the service. Serial production began in June 1958. It was developed from the T-54 and adapted to the conditions of combat when using weapons of mass destruction in Europe. The engine power, the range and the combat set (ammunition supply) were increased and the ABC protection (hermeticity of the combat area) improved. The optimized bullet-repellent shape of the tower and trough was striking. Despite the modernization, great value was placed on simple operation and maintenance under battlefield conditions.

The main purpose was the offensive use in large-scale operations after own or opposing nuclear weapons strikes. Combat actions should be carried out with the largest possible armoured divisions (from a battalion upwards) in conjunction with motorized infantry, artillery and other sub-armed forces and under cover from the air. But it turned out that the tank could be used for almost all tasks under almost all conditions.

The possibilities of the T-55 in battle with main battle tanks had not increased from 1958 to 1962. APDS and HEAT projectiles for the 100 mm D-10 cannon had been developed, but the transfer to the armament of the troops had not yet been determined. Thus, the T-55 could only successfully fight the British Centurion like the US M60 within the range of the direct shot when hitting the side or when hitting the tower. The Soviet research institute VNII-100 created a model for a duel T-55 against M60 and found that without APDS and HEAT projectiles, the T-55 had no chance of success with only 36% chance of success, with this ammunition there was a chance of success 50%. As a result of the international development of modern main battle tanks, it was stated that the Soviet medium tanks were considered outdated in the early 1960s.

The high losses in the Six-Day War resulted from the poor level of training of the crews and poor tactics. In particular, the lack of cover from the air and poor battlefield reconnaissance often had a devastating effect.

With proper use (infantry and artillery support) and competent troop leadership, smaller units with the T-55 dominated the battlefield until the late 1960s (see Vietnam War).

T-55 AM, The multi-layer arrangement of the armour elements within the reinforced front plate can be clearly seen in this sectional model of the former NVA.
The armament consisted of a vertically and horizontally stabilized D-10T2S cannon with a calibre of 100 millimetres, an MG PKT (7.62 mm) mounted parallel to the main weapon and a Fla-MG, usually 12.7 mm DSchK on the loading gun hatch. Early versions of the T-55 still had a rigidly installed PKT in the driver's front. However, since it could hardly be used sensibly, it was soon left out.

The cannon fired cartridge ammunition (fragmentation, explosive charge and sub-calibre). The fire speed under optimal conditions was 7 rounds while standing and 3 rounds in motion up to 25 km / h per minute. The firing range indirect aiming was up to 1660 meters, in the combined fire on area targets up to 14.6 km. In the firefight from the movement, the average chance of hits was 65.5% at 1000-1500m. A plug-in tube for 23 × 115 mm AM23 ammunition could be installed for training purposes, which significantly reduced the costs for training ammunition. There were also 100 mm practice grenades with reduced propellant charge, flare and a weak disassembly charge.

In the mid-1970s, a modern electronic fire control system was developed with which older T-55s could be retrofitted. Among other things, it included new target devices, fire control computers, laser range finders and a laser sensor. In addition to normal grenades, the modernized cannon could now also fire laser-guided anti-tank guided missiles (100 mm tubular rocket 3UBK10-1 with rocket 9M117 (only with T-55AM2B)) with a range of up to 4000 m. The combat value, especially the firepower, was constantly adjusted through these different retrofit kits.

A novelty was the diving ability to overcome the water hazards often to be expected in the European theatre of war (up to about 4.50 meters depth). The preparation time for a dive trip was around 1 to 3 hours depending on the level of training of the crew. Orientation underwater was carried out via a periscope, which also served as a snorkel and was mounted on the right (loader) side and with a gyrocompass for the driver. A bilge pump was installed to remove the ingress of water. The crew was equipped with life jackets and diving rescuers (RG-UF) for emergencies. An underwater trip (UF) was permitted in peacetime up to 1000 meters in length, due to the increasing engine temperature (max. 110 degrees cooling water temperature) due to the limited cooling underwater there was a risk of an engine accident.

The crew's field of vision was naturally restricted, the field of vision in detail: the driver to the front and to the right, the loader from the front right to the back to the right, the gunner only to the front, the commander from diagonally front right across the entire left side to the rear right. The individual fields of vision overlap, so an all-round view was possible. The observation was carried out using standardized angle mirrors, which could easily be exchanged in combat within two minutes. The commander had an optical target/observation device TPKU-2B (5x magnification) in a rotatable dome and four angle mirrors. At night, the observation device could be exchanged for the IR viewing device TKN-1. The targets were illuminated with the IF headlamp OU-3G. With the commandant aiming system, he was able to point the tower (and thus the cannon) horizontally at a target. The gunner had an optical riflescope 2B-22 with two magnification levels, an infrared night aiming device TPN-1-22 and an angle mirror. Accuracy was sufficient for the time and guaranteed accurate shooting from the movement at a target the size of a battle tank up to about 1800 m. A loader was provided with a WS-4 or WS-4M angle mirror that can be rotated through 360 °.

The T-55 was conditionally suitable for night combat. For this purpose, he had three infrared viewing devices; one for the driver, one in the commander's cupola and an IR aiming device for the gunner. In addition, the reticle of the day target device could be illuminated. The infrared devices were used both actively (in connection with IR headlights) and passively. For observation at night, the observation device could be removed and replaced by an active infrared night vision device of the type TKN-1. The infrared headlight, which was permanently attached to the commander's dome, had to be mechanically coupled to the night vision device. The power supply unit was installed in the hatch instead of an angled mirror.

The transversely installed V12 diesel engine with four-valve technology (DOHC) was reliable and, with its diesel direct injection, economical for a combat vehicle. The maximum speeds reached were 25 km / h off-road and up to 50 km / h on the road, which could vary depending on the manufacturer version. The range at marching speed (speed in the column: 30 km / h) was 500 to 700 km with additional tanks.

The drive consisted of five double castors (with solid rubber tires) on each side in single suspension, a guide wheel (front) and a drive wheel (rear). There was a larger gap between the first and second roller. This should reduce the effect of mines on the chassis and at the same time improve the ability to climb and cross. The suspension was carried out via torsion bars. The caterpillars had 91 profiled links made of cast steel with metal rubber joints.

The power was transmitted to the drive rings via a reversing gear, a change gear, two planetary gear and two side gears. The change gearbox had five forward gears and one reverse gear (in U-gear, i.e. 1st and reverse gear were in the middle), which could be reduced by about 50% with the steering levers in order to achieve more traction.

It was controlled with the help of two steering levers, each of which acted on the planetary gear via a clutch. By retracting the steering lever, the speed of rotation of the respective drive ring is reduced, initially by disengaging and at level 1 by halving the speed. The clutch is disengaged again via stage 1 and the drive train is braked in stage 2. The main clutch was a 17-plate dry clutch, which had to be operated with the left foot to change gears. All controls were operated either hydraulically or mechanically.

The vehicle was started with the steering levers after engaging the second gear, from level 2 to level 1 to the normal position. As a result, the main clutch was less stressed.

The engine power increased over the years and in the course of technical development from originally 500 hp to almost 800 hp. The pneumatic starting system should preferably be used to start the engine. Behind the driver's seat was stored in two compressed air cylinders, each with 150 bar compressed air, which was fed into the cylinders via a distributor with check valves rotating at half the crankshaft speed, thus moving the pistons. The electric starter was mostly used in combination with the pneumatic starting system or when the air pressure in the system was no longer sufficient. Before starting, the cooling water had to be preheated to 70 ° C using a preheater in which diesel was burned. Because of the enormous wear on the pistons, a cold start was only permitted in extreme emergencies, and should only be able to tolerate two to three cold starts. In the event of a combat alarm, the driver had to hurry to his tank to start the preheater. The preheating usually took 15 to 20 minutes and was stopped at 40 ° C in the event of a battle.

A mileage of 3000 kilometres was planned under training and combat conditions until the main overhaul of vehicle and drive. In practice, this requirement was often far exceeded (at least in the NVA, for example, 6000 km was reached at the Löbau officers' college). 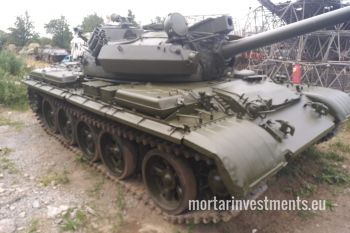 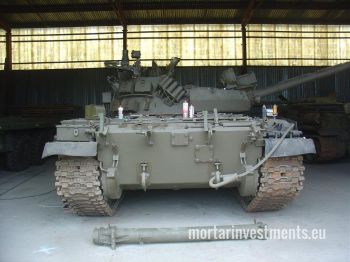