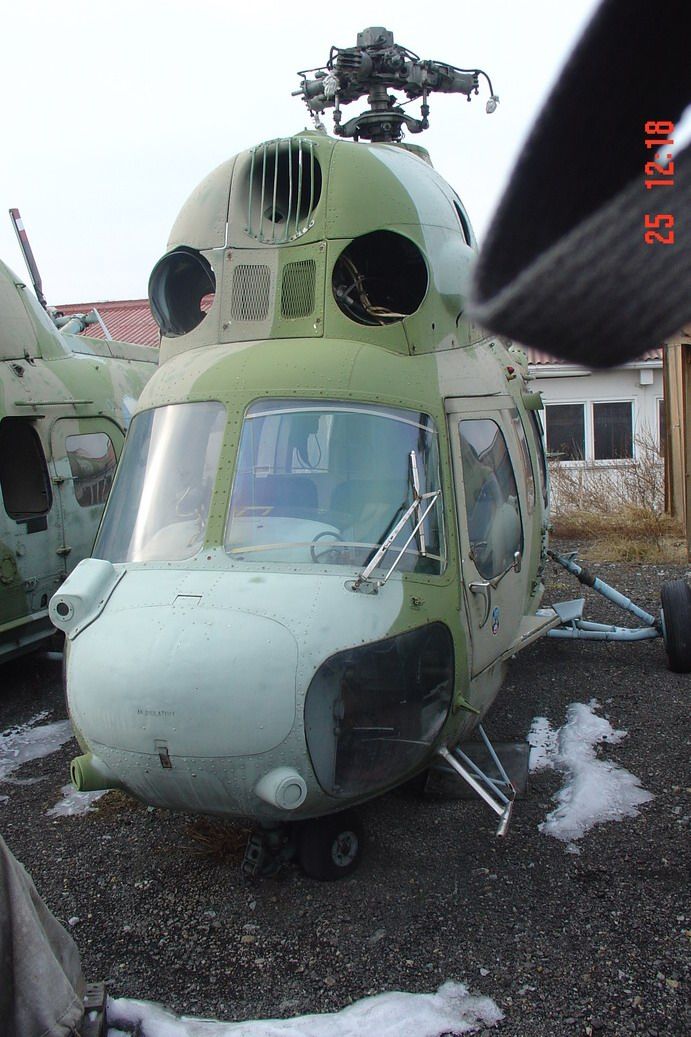 Mi-2 (according to the NATO classification: "Hoplite") is a Soviet multi-purpose helicopter developed by the Moscow Design Bureau of M. L. Mil in the early 1960s. In 1965, mass production was launched in Poland. It is widely used to perform many civilian and military tasks. Until the end of production in 1992, more than 5400 units were built. Due to the fact that the production of this helicopter was completed in 1992, at the moment the helicopter does not have modern security systems, control, etc. and cannot compete with modern aviation technology.

Negotiations of representatives of the aviation industry of both countries on the serial production of the Mi-2 helicopter began in 1963. At the beginning of 1964, an agreement was concluded on the transfer to Poland of a license for the construction of new helicopters and engines for them. Under this agreement, the Soviet Union provided a guarantee for the purchase in Poland of a sufficient amount of this aircraft, as well as engines and spare parts for them.

The factories in Swidnik and Rzeszow had to learn new production technologies in a short time. The Soviet Union assisted in organizing the manufacture of supplies of equipment and spare parts. Soviet designers and specialists were sent to work in Poland.

On August 26, 1965, the first production Mi-2, made from Soviet parts, was put into the air in Swidnik. The first flight of the Mi-2, completely built in Poland, took place on November 4, 1965; the helicopter was controlled by a crew of pilots V. Mertsik, K. Moskovich and X. Yarovsky.

The first helicopters were transferred to the USSR for test flights. The appearance of the serial Mi-2 was different from the appearance of the second modified prototype (B-2): they had no keel surface on the tail boom and the shape of the holes in the front of the “boar” under the oil cooler air intake was different (they were not oval, but rectangular). In addition, the location of the antennas of the radio station and the flashing beacon was changed.

The following year, serial production of the Mi-2 was launched at full production capacity. The first production helicopter was returned to the Polish Air Force on December 29, 1966, after four months of factory tests. This instance has not been preserved.

For assistance in the manufacture of the Mi-2, workers at the Moscow Helicopter Plant received Polish state awards, and General Designer M. L. Mil and N. S. Otdel'tsev, who made a significant contribution to the introduction of the Mi-2 into production, received commander's crosses of the Order of the Renaissance of Poland.

The mass production of Mi-2 helicopters was completed in 1992, by that time over 5400 units had been built.

The Mi-2 fuselage has a semi-monocoque all-metal construction, consists of three parts: the bow, where the cockpit is located, the central one with the passenger compartment, and the tail, which includes the tail boom with a controlled stabilizer.

The power plant is located in a large superstructure above the fuselage of the helicopter - the so-called "boar" (from French cabane - a hut). On the front of the three-stage main gearbox there are two GTD-350 engines, and on top there is a fan cooling the oil coolers of the engines and the main gearbox, as well as units on the main gearbox.

The helicopter’s fuel system includes one 600-litre fuel tank located under the cockpit floor, and it also provides for the installation of two additional tanks on the sides of the fuselage, with a capacity of 238 litres. The engine oil system is separate, includes 2 oil tanks with a capacity of 12.5 litres each and air-oil radiators with a fan for cooling them.

The bearing system includes a three-blade rotor with rectangular blades and a two-blade tail rotor. Hydraulic dampers are installed on the main rotor. The control of the common and cyclic pitch of the rotor is carried out using hydraulic boosters. In the event of a hydraulic failure, the pilot can apply manual control.

The crew cabin is single or double, most often, the pilot sits on the seat on the left, in the training version the pilot and cadet are sitting next to each other, in this case, the helicopter control is doubled.

Pilot and passenger seats are located in front of the fuselage, batteries and various equipment are also located there. Behind is a cargo-passenger cabin with a door on the port side. It has dimensions 2.27 × 1.2 × 1.4 m and is equipped with a ventilation system that works both in the mode of heating the cabin with warm air from the engines and in the mode of cooling with outside air. A fuel tank container is attached to the floor of the cab, while serving as a mounting point for two three-seater sofas. For another (eighth) passenger, a folding seat is attached to the rear wall of the housing. When transporting goods, passenger seats can be removed. In the sanitary model in the cabin, up to four stretchers can be installed, and there is also room for an accompanying paramedic. 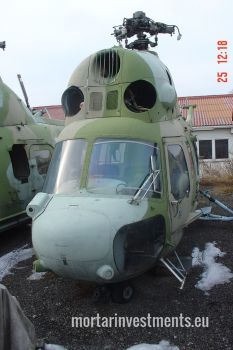 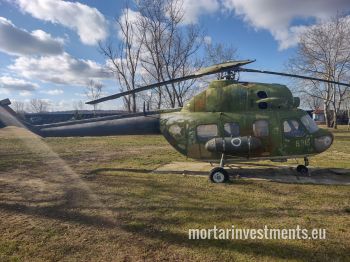