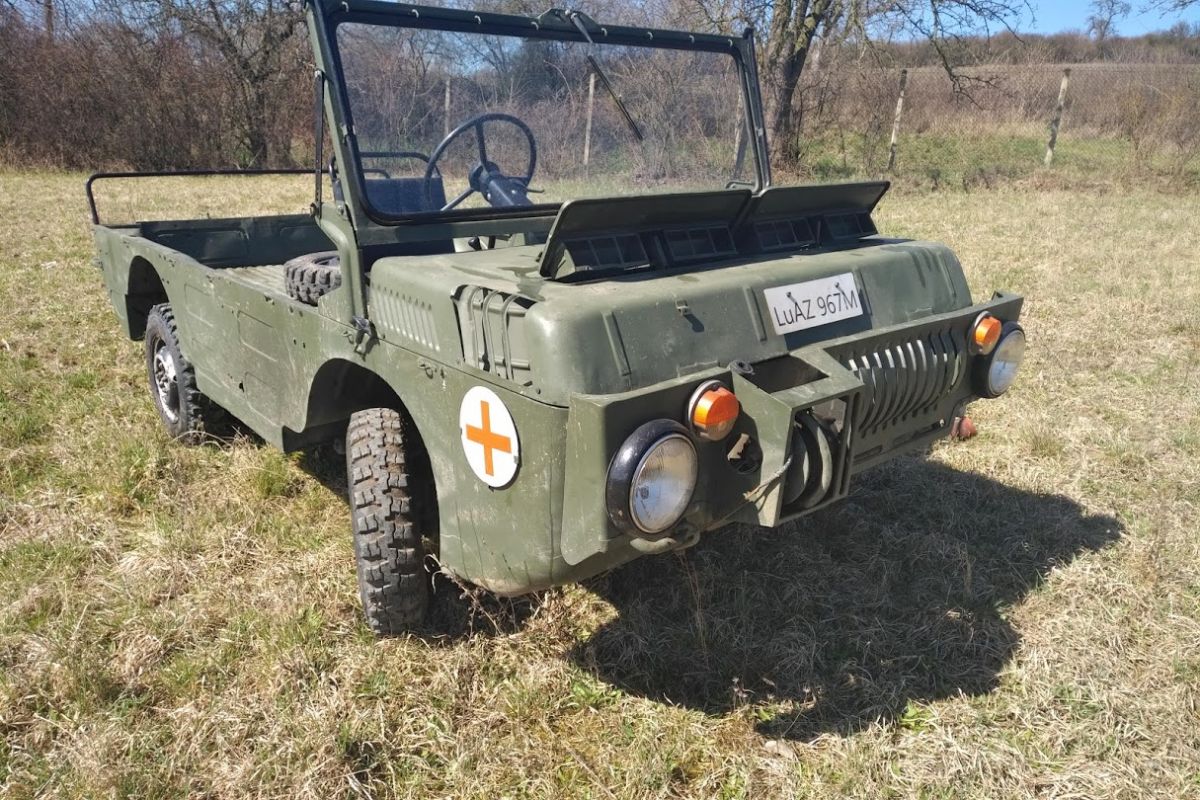 The LuAZ-967 (Russian ЛуАЗ-967), sometimes also referred to in the early years as the ZAZ-967 and possibly the LuMZ-967, is an amphibious vehicle made by the manufacturer LuAZ, which was used in the armies of the Warsaw Pact as a "vehicle for injured". The first prototypes were built in the late 1950s. Serial production only started in 1975 under the name LuAZ-967M. The name of the army for the vehicle was "Transporter perednowo kraya", short TPK (Russian транспортер переднего края, short ТПК), which means transporters for the front line.

LuAZ-967 was developed taking into account the experiences of the Soviet Army in the Korean War (1950-1953). Serial production was preceded by almost twenty years of development, starting with various prototypes from the vehicle construction institute NAMI. The first to be built in 1957 was the NAMI-032G, which was not yet secret and the development of which was reported in the Soviet trade press. He received a two-cylinder four-stroke gasoline engine from the Irbitski Motozikletny Sawod, as was also used in motorcycles from this manufacturer. The two versions NAMI-032M and the NAMI-032S followed. Both received a new body that was significantly more similar to the later series vehicle than that of the first prototype. The NAMI-032S used the V4 engine MeMZ-967, which was based on the MeMZ-966 from the ZAZ-965A. A hovercraft was even built under the name NAMI-032SK. In January 1961 the project was given to the design office of the Ukrainian Saporisky Awtomobilebudiwny Sawods (ZAZ), where it received the designation ZAZ-967.

At ZAZ, the vehicle has undergone a major overhaul. In addition, parts of the technology were standardized with that of the off-road vehicle ZAZ-969, which was also under development (later as ZAZ-969 and then in series as LuAZ-969A). In the following years, a double-digit number of prototypes emerged, in 1964 and 1967 there were major changes to the design. At that time, a MeMZ-967 engine was installed, which produced 30 hp (22 kW) with a displacement of 887 cm³. The ZAZ-967 weighed 920 kg empty and was able to hold 350 kg of cargo.

In 1967, the project was transferred to Luzki Awtomobilny Sawod, without ZAZ having started series production. In this context, the name LuMZ-967 also appears, the plant was only renamed LuAZ in 1966 by Luzki Maschinostroitelny Sawod (LuMZ for short). However, it is not used consistently in the literature. At LuAZ, eleven other prototypes were built: one in 1968, which was tested together with NAMI, five more in 1970 and another five in 1971. Series production was approved a little later and started in 1975. Production ended in 1991. [5] At least 7900 LuAZ-967M were built.

From the beginning of the 1980s, models with three axles and all-wheel drive were also built and tested; serial production never occurred. At least one vehicle of this type has been preserved in a museum.

The "Vehicle for the Injured" was designed for use in the "foremost area". It was capable of air landing and was able to overcome smaller trenches on its own by using track bridges on the way back.

The foldable steering column, windscreen and retractable seats made it possible to control the vehicle while lying down, which is particularly advantageous when fired at. The side-mounted track bridges could be set up as splinter protection.

The driver's seat is in the middle, since the stretches for the wounded were attached to the side. Alternatively, in addition to other medical equipment, a wounded transport mat was part of the equipment. By means of the two emergency seats arranged on the side, slightly wounded people could be transported sitting down instead of carrying them. With the standard cable winch (approx. 2 kN tractive force), the wounded could be rescued from the shooting area on a tent track and pulled to the vehicle. As the seal against the ingress of water was insufficient, the equipment also included a bilge pump with a pump sump in the engine compartment. The speed in the water is about 3 km / h, because the drive is done exclusively via the wheels.

Different versions of the LuAZ-967 were introduced in 1978 with the medical battalions of the armoured divisions of the National People's Army of the GDR. A total of about 250 vehicles were imported.

The vehicle was not decorated with national emblems in any army, but carried the Red Cross on the front fenders, the windscreen and on the right rear of the vehicle. Instead of the steel helmet, the drivers wore an armoured driver's hood because they were in radio contact via the radio R 105 they carried.

There were different model variants over the long construction and production time of the vehicle.